UPDATE: Sales have closed. Thank you for your support!

In tandem with New York Comic Con 2017 — running from Thursday, October 5th through Sunday, October 8th — Valiant is opening the doors of its Midtown Manhattan headquarters to fans who donate in support of the CBLDF’s vitally important cause. For donations beginning at just $100, qualifying fans can obtain an all-access tour of Valiant HQ — located just steps from New York Comic Con’s central nerve center at the Javits Center — as well as rare and limited-edition Valiant comics and merchandise, the opportunity for one-on-one signings with Valiant creators and staff, and more 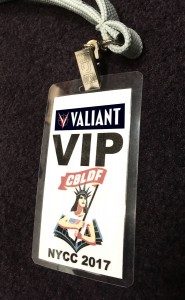 Click through the links above to donate and secure your space now! Tours and signing times will be assigned for Friday, October 6, or Saturday, October 7, at Valiant’s discretion.

“Valiant Entertainment has been an active and vital supporter of the CBLDF since they initially burst onto scene, and it’s always great to work with them on fundraising events like this one,” said Alex Cox, Deputy Director of the Comic Book Legal Defense Fund. “They have some of the most dedicated fans in comics, and hopefully this experience will give those fans an inside look at the industry, while also helping us continue our important work, defending Free Expression.”

Valiant Entertainment has been a supporter of the CBLDF since 2012 and a Corporate Member of the fund since 2013. In the past four years, Valiant has created a manner of initiatives in support of the Fund, including the creation of exclusive covers annually for Comic-Con International in San Diego by comics luminaries such as Erica Henderson, Gilbert Hernandez, Tony Millionaire, and more.

About Comic Book Legal Defense Fund
Comic Book Legal Defense Fund is a non-profit organization protecting the freedom to read comics! Our work protects readers, creators, librarians, retailers, publishers, and educators who face the threat of censorship. We monitor legislation and challenge laws that would limit the First Amendment. We create resources that promote understanding of comics and the rights our community is guaranteed. Every day we publish news and information about censorship events as they happen. We are partners in the Kids’ Right to Read Project and Banned Books Week. Our expert legal team is available at a moment’s notice to respond to First Amendment emergencies. CBLDF is a lean organization that works hard to protect the rights on which our community depends. Please support our important work! https://cbldf.org

About Valiant Entertainment
Valiant Entertainment is a leading character-based entertainment company that Owns the largest independent superhero universe in comics. With more than 80 million issues sold and a library of over 2,000 characters, including X-O Manowar, Bloodshot, Harbinger, Shadowman, Archer & Armstrong, and many more, Valiant is one of the most successful publishers in the history of the comic book medium. Today, the company’s characters continue to be forged in publishing, licensing, film, video games, and beyond. Valiant consistently produces some of the most critically acclaimed comics in the industry and has received numerous industry awards and accolades, including a Diamond Gem Award for Comic Book Publisher of the Year. Valiant also recently announced a multi-picture deal to bring Bloodshot and Harbinger to the big screen as feature films. Visit them online at ValiantEntertainment.com.