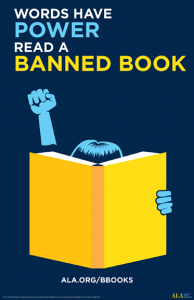 Banned Books Week 2017 is wrapping up, and this year the celebration of free expression seems more relevant than ever. In light of recent public debates over speech and counterspeech, the mechanisms of protest, and the flow of information and disinformation, this is a time to appreciate — and defend — the principles of intellectual freedom that make that debate possible. Below are some of the most interesting and thought-provoking reflections on Banned Books Week that we came across this time around!

Banned Books Week: Why are illustrated books being challenged more than ever? (Washington Post)

ALA’s Top Ten List of Frequently Challenged Books for 2016 included three graphic novels: This One Summer by Jillian and Mariko Tamaki, Drama by Raina Telgemeier, and Big Hard Sex Criminals by Matt Fraction and Chip Zdarsky. CBLDF Executive Director Charles Brownstein spoke to the Post‘s Michael Cavna about why some people are so quick to challenge comics:

Graphic novels are frequently reduced to a single image or sequence of images that can be removed from the larger context of the work, and used to justify censorship. Comics’ use of images and words give the stories added power that resonates with audiences, and makes works like ‘This One Summer’ and ‘Drama’ even more compelling. These works must be considered as a whole to be fully appreciated. When that happens, the complexity, nuance and sophistication of the stories can be fully appreciated.

Brownstein also participated in this episode of the Project Censored podcast, along with NCAC Youth Free Expression Program Associate Abena Hutchful, ALA Office for Intellectual Freedom Director James LaRue, and cartoonists Peter Glanting and Adam Bessie. Topics of discussion include “the origin of Banned Books Week in the 1980s, the ongoing attempts to restrict what students may read in school and recurring themes surrounding book challenges, as well as the continuing importance of comic books and graphic novels in today’s media world.”

One of the best safeguards against censorship in libraries and schools is grassroots support for free expression. Of course tenacious librarians and teachers, fair-minded board members, and carefully crafted policies all play a role, but an overwhelming community rebuke to a book challenge virtually ensures that it will fail. This Banned Books Week, CBLDF and our partners in the Kids’ Right to Read Project are proud to unveil a brand-new action kit for students and parents organizing in defense of a challenged book.

Banned! Six Cartoonists on Their Favorite Censored Books (The Nib)

The freelance journalist and Dakota North creator muses on the importance of exposing oneself to new or complex ideas, such as those often found in controversial comics like Sonny Liew’s The Art of Charlie Chan Hock Chye.

THIS ONE SUMMER Original Art Charity Auction for Banned Books Week! (The Beguiling)

This One Summer was the #1 most challenged book of 2016, largely because many parents and school officials did not expect to encounter adolescent issues in a Caldecott Honoree. (That award is widely perceived as being for children’s picture books only, but can apply to any book for readers up to 13 years old.) To mark Banned Books Week, Jillian Tamaki and Toronto comic shop The Beguiling are auctioning off original art from the book with all proceeds going to the UNICEF Emergency Fund. The online auction runs through next Thursday!

Sex, Politics and the Banned Books of 2016 (New York Times)

The list of the 10 most challenged books in 2016 reveals much about the times in which we live. The most common threads were gender, religious diversity and L.G.B.T. issues, arising in an election year in which political agendas, such as the debate over bathroom bills, immigration and race, likely had an impact, [ALA OIF Director] Mr. LaRue said.

CBLDF is a proud partner in the Kids’ Right to Read Project along with NCAC and American Booksellers for Free Expression. Here are a few of the books we’ve defended this year, including The Absolutely True Diary of a Part-Time Indian by Sherman Alexie and I Am Jazz by Jazz Jennings, Jessica Herthel, and Shelagh McNicholas.

Before Kristin Pekoll became Assistant Director of ALA’s Office for Intellectual Freedom, she was a librarian in West Bend, Wisconsin. When she posted a list of LGBTQIA-themed YA books on the library’s website, she never dreamed that it would set off a community-wide battle over free expression. In this six-minute video, Pekoll discusses the stressful experience of weathering a challenge and the empathy that it gave her for the librarians and teachers around the country who call upon OIF for help in similar situations.

Banned Books Week: How censorship through the decades cracked down on literary sex, drugs… and poo poo head (The Independent)

For the first time ever, Banned Books Week is being officially observed in the UK thanks to Index on Censorship, the newest partner in the Banned Books Week Coalition. Here, The Independent takes a look back at some frequently banned and challenged British authors including D.H. Lawrence and Roald Dahl.

‘Write no more’: 10 books that were banned (The Guardian)

Another historical overview from across the pond reaches back even further, to 1779–and notably includes a 1954 story from EC’s Shock SuspenStories #14.

Who Gets to Choose Which Childhood Experiences Are ‘Appropriate’? (Education Week)

English professor and former middle school teacher Christina Berchini deconstructs the argument that young readers need to be protected from potentially disturbing content in books like Dave Pelzer’s memoir A Child Called It or Laurie Halse Anderson’s Speak. Recalling a fellow teacher’s concern that students’ “blissful childhood” would be disrupted by reading Pelzer’s book, Berchini counters that many students have already lived through experiences that no one would consider “blissful.”