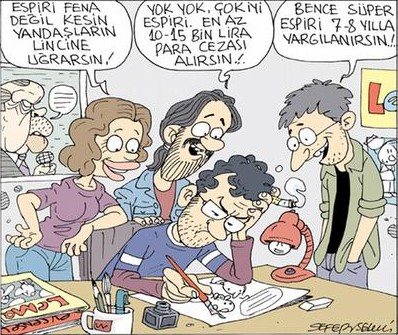 As Turkish political cartoonist Musa Kart and his journalist colleagues from the newspaper Cumhuriyet continue to await a verdict on baseless charges of “aiding and abetting” terrorist organizations, other cartoonists in Turkey are also feeling the heat. At least one, Sefer Selvi, is officially under government investigation based on a citizen’s complaint.

According to a recent article from Deutsche Welle, such investigations are nothing new for Selvi, who has stood trial more than once before. He and other satirical artists agree that the atmosphere in Turkey today is more repressive than ever before in their lifetimes, but that hasn’t curbed his wry sense of humor. In the cartoon shown here, a beleaguered Selvi attempts to work while colleagues hang over his shoulder and speculate whether the joke he’s drawing is good enough to get him either a fine or prison time.

Any independent cartoonist still working in Turkey is aware of the risk involved, Selvi told DW’s Kürsat Akyol. “In recent years,” he observed, “we have seen things that we did not experience [even] after the military coup in 1980. Because everything the ‘autocrat’ [President Recep Tayyip Erdoğan] says is considered to be right.”

Freelance illustrator Tan Cemal Genç noted the country’s precipitous descent into authoritarianism. Not so long ago Turkey was on track for European Union membership, but things changed abruptly after mass protests against Erdoğan when he was Prime Minister, said Genç:

A rapid step backward was taken after the Gezi park protests in 2013, and an authoritarian process began. This process accelerated drastically after the coup attempt in 2016. After the constitutional referendum on April 16, charges were brought against a satirical magazine for three front pages, even though they were a year or two old. This was done to frighten and intimidate people.

Echoing Musa Kart’s scathing self-defense presented in court this summer, cartoonist Gülay Batur pointed out that she and her colleagues are natural enemies of authoritarianism:

In Turkey, we have not been able to do things in a relaxed manner and with a clear conscience for some time now. Of course, only the ones who criticize and complain experience difficulties. Governments classify them as oppositionists who endanger their existence. In this sense, cartoonists and humorists who oppose everything that is hostile are natural opponents of intolerant governments. That is why governments want them silenced.

This year alone two major Turkish satire magazines, Gırgır and Penguen, have been permanently shuttered due to increasing government repression. Numerous others endure, however, led by Leman which frequently includes Selvi’s work. Also gaining steam is Bayan Yanı, a feminist publication that hosts Batur and a rotating cast of other women cartoonists.

Kart, meanwhile, could face up to 29 years in prison if convicted on the politically motivated charges leveled by Erdoğan’s government. There have been no new developments in the mass trial of Cumhuriyet staff since late September, when columnist Kadri Gursel was released after almost a year behind bars. Like Kart, Gursel and the other defendants could still be sent back to prison depending on the outcome of the trial.

← CBLDF Joins Defense of To Kill a Mockingbird in Biloxi
The Goddamned & More Signed by Jason Aaron to Benefit CBLDF! →