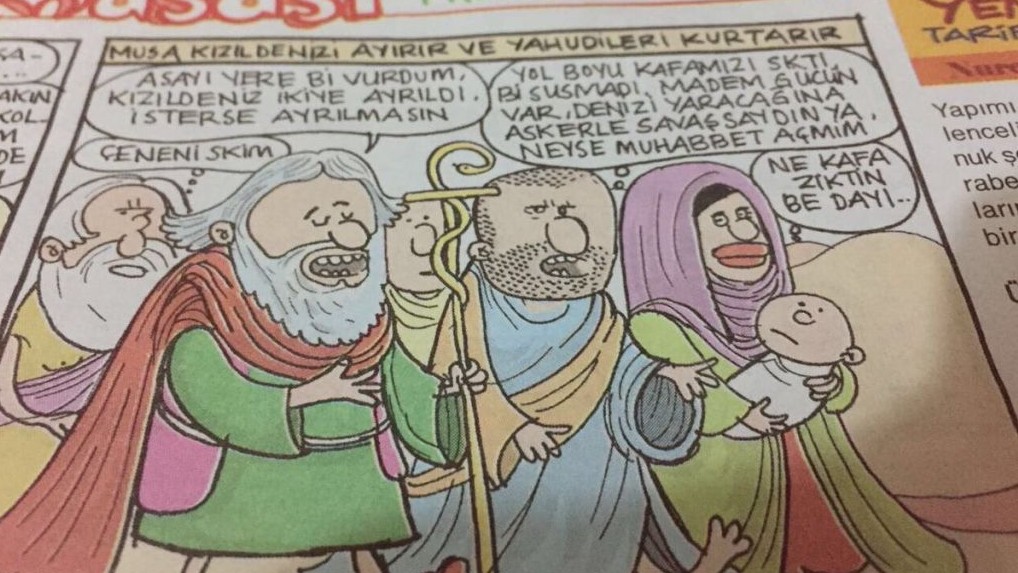 The publisher of the Turkish satirical magazine Gırgır abruptly shut down the publication and laid off all its staff last week in response to a cartoon that irreverently depicted Moses and was deemed offensive to both Jews and Muslims. The magazine’s parent company Sozcu is staunchly secular and well-known for its opposition to President Recep Tayyip Erdoğan, but said that Gırgır’s staff had deliberately “put the company in a difficult situation.”

The cartoon shows Moses leading the Jews out of Egypt, with a few of his followers using vulgarities in regard to their situation. It drew protests both from individuals in Turkey’s Jewish minority and from Erdoğan’s government, which launched a criminal investigation of the magazine for “insulting religious values adopted by a group of people.” Moses is a prophet in Islam as well as in Judaism and Christianity, and the depiction of prophets is taboo in many Muslim countries including Turkey. A government spokesman claimed that the cartoon “has nothing to do with freedom of speech or humor. This is immoral and a hate crime.”

Before it was shut down, Gırgır apologized for running the cartoon, claiming that it had been overlooked “because of tiredness and insomnia.” Publisher Sozcu nevertheless brought the nine-year-old magazine to an unceremonious end, saying that “the cartoon has disturbed society and disturbed us as a publishing company.” It is unclear whether the closure will be enough to dissuade the government from pushing forward with the investigation and possible charges.

The demise of Gırgır is only the latest development in a years-long Turkish crackdown on press freedom in general and cartoons in particular. The well-known cartoonist Musa Kart remains in prison awaiting trial along with several of his colleagues from the newspaper Cumhuriyet, accused by the government of providing support for organizers of the failed coup attempt in July. Another satirical magazine, LeMan, was last year prevented from printing a special post-coup edition with a cover cartoon suggesting that the government deliberately pitted civilians against the military plotters. The following month, cartoonist Dogan Güzel was one of more than 20 staffers from the Kurdish newspaper Özgür Gündem who were arrested after their publication was shut down by government order.