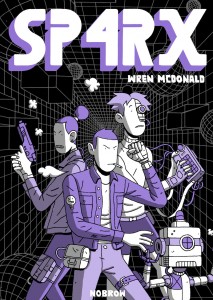 A San Antonio mother is unhappy that her son was able to check out the graphic novel SP4RX by Wren McDonald from the library at Hobby Middle School, telling a local news station that she found “drugs, naked women and cuss words” inside the book. Samantha Robinson has filed a challenge as outlined in Northside Independent School District policy, but NBC affiliate News 4 San Antonio appears quite content to turn viewers against the book while the process is ongoing with a biased headline calling it “vulgar.”

SP4RX is a dystopian science fiction graphic novel about the title character, a young hacker, uncovering a plot by the wealthy elite to control the working class via cybernetic implants. The book received numerous positive reviews and was named to at least two best-of-the-year lists: Kirkus Reviews’ Best Teen Books of 2016 and Den of Geek’s Best Comics of 2016.

The story from News 4 does not mention the age or grade level of Robinson’s son, or whether he read the entire book. His mother did, however, enumerating 41 pages out of 116 that she said included “something negative.” She also contended that if the book “were made into a movie, it would be rated R.”

Despite the biased and thinly detailed report, News 4 did at least contact the school district for comment and received information on the challenge procedure:

In order to try to get a book removed, parents have to fill out a form. School officials will try to work with the parent to find a resolution. If further action is necessary, a committee of school officials and parents from different campuses will be formed. That committee will be required to read the book and determine if it should be removed from campuses.

The fact that this was the district’s sole response to the inquiry is probably a good sign, suggesting that administrators will follow the challenge policy rather than being swayed by sensational reporting or fear of public backlash, as happens all too often in cases like this. We will be watching closely, so stay tuned!