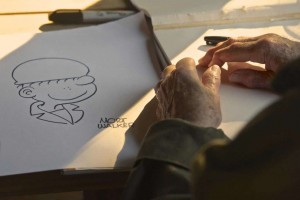 Mort Walker, a prolific comic strip artist, advocate for comic history preservation, and the creator of world famous Beetle Bailey, passed away Saturday, January 28, 2018, from pneumonia at his home in Stamford, Connecticut.

Walker lived to be 94 years old and can be credited with the creation of nine different syndicated comic strips, but it was his loafing protagonist, Beetle Bailey, and the whole gang at Camp Swampy that brought him international success. He drew the daily comic strip for 68 years, making him the longest running cartoonist in history.

Walker was met with censorship several times throughout his lengthy career. Once in 1954 the Tokyo edition of Stars & Stripes, a U.S. military newspaper, dropped Beetle Bailey because they thought it encouraged disrespect to officers in the service. The stateside media picked up the story and the press that resulted from the incident gave the strip its first large circulation boost.

Then again in 1970, Walker added a Black character, Lt. Jack Flap, to the previously all white strip. The Peanuts had done the same thing two years prior, but it was still very progressive at the time, so some southern newspapers and Stars & Stripes, again, dropped the strip, but a hundred others picked it up because of the inclusion of the new character, so Walker and Beetle Bailey benefitted from the controversy.

Walker occasionally drew strips that he knew were too scandalous for syndication. He said he drew these just for himself, and they were placed in a black box at the bottom of a drawer. Eventually, these racy drawings found a home though in Scandinavia and Norway, where Beetle Bailey was already very popular. The European sensibilities were more comfortable with the overtly sexual nature and nudity these strips contained.

TR “Rocky” Shepard, former president of King Features Syndicate, a division of Hearst Entertainment that distributes comics, puzzles, and other content to over 4,000 online and print newspapers around the globe, worked with Walker for over twenty years.

Mort was an incredibly personable, compassionate man, a towering artistic talent the likes of which will not soon pass this way again. He founded the International Museum of Cartoon Art with the help of his wife Catherine and has served for decades as a tireless advocate for cartoonists, the profession of cartooning and the important place in history and in our culture that the comics have played.

The International Museum of Cartoon Art was founded in 1974 in a Mansion in Greenwich, Connecticut. The collection grew to be worth over $20 million dollars, but the museum itself had funding problems and shifted location multiple times until it sadly closed in 2002 in Boca Raton, Florida. Luckily in 2008, it was able to be transferred to Ohio State University, and now the collection is able to be seen at a gallery in the Billy Ireland Cartoon Library and Museum.

Walker is survived by his wife Catherine, his sons Greg, Brian, Morgan, Neal, and Roger, his daughters Polly and Marjorie, his stepdaughters Whitney and Priscilla, and several grandchildren. Two of Walker’s sons, Brian and Greg, have worked in cartooning with their father for decades and they plan on continuing his work in the future.

In lieu of flowers, the family asks that donations be made to Billy Ireland Cartoon Library and Museum.