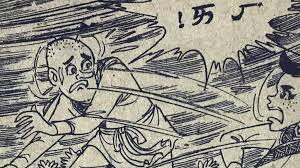 Hsu Mao-sung, an 81 year-old Taiwanese comic book artist and publisher, spoke about the censorship of comics from the 1960s to the 1980s in a recent video interview with the BBC.

Hsu spoke about some of the restrictions artists faced in those difficult years:

Our characters couldn’t jump too high. They couldn’t hit with their palms. Killing people or showing blood was even more forbidden. And we couldn’t draw five stars because that represented the Chinese Communist Party’s national flag. In more serious situations, the security headquarters would call you in for questioning.

The restrictions are reminiscent of the Comics Code, but artists in the U.S. usually didn’t have to fear government intervention for violating the rules. The environment in Taiwan must have been frightening, especially coming out of a period during which comics were so popular that Hsu says famous comic book creators were treated like movie stars. One writer, Bo Yang, was imprisoned for eight years for a translation of a Popeye cartoon that was seen as critical of Chiang Kai-shek, then the President of the Republic of China. Hsu says of that time, “It was very painful for me. I liked to draw and couldn’t bear to abandon drawing comics.”

Hsu’s persistence was rewarded this past September when he was given a Special Contribution Award, not only for his own breadth of work, but also for his commitment to encouraging other artists and his success publishing throughout the era of government censorship. Even though Hsu could not attend the ceremony, his efforts were praised by Taiwan’s President Tsai Ing-wen, who was at the 8th Golden Comics Awards to present her policies regarding the comics and animation industries.

The video that BBC posted, which is courtesy of Taiwan’s Ministry of Culture, may be truncated, though. The webpage mentions that Hsu says it may be too late to save Taiwan’s comics industry, but the statement doesn’t appear in the two and half minute cut of the video posted. Whether or not the video of Hsu actually says it, it could very well be too late for Taiwan’s comic industry to recover from decades of government control. Regulations and censorship eased after the 1980s, but interest in Taiwanese comics had disappeared — maybe for good — replaced by most people’s fascination with the prevalent Japanese manga. As we’ve seen in the U.S., regulation of comics content can have a lasting impact on the format.

However, Taiwan’s commitment to honoring their tumultuous past and encouraging the growth of these industries in the future is evident. Can you imagine many countries where the president would show up at their comics awards?

View the interview with Hsu in the video below.