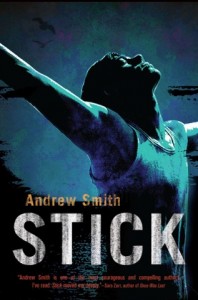 A parent and student filed a complaint over the book, saying it was inappropriate because of vulgar language. A review committee made up of two community members, two English teachers, a library specialist teacher, and an administrator recommended that the book be kept available. But Deputy Superintendent Steve Phillips decided to remove the book from middle school classrooms and allow it only in classrooms attended by students in grades 11 and 12. Per district policy, Phillips has the final say in the decision.

Stick is about two boys: Stark (nicknamed Stick), who is tall and thin and was born with a congenital defect of having only one ear. His older brother, Bosten, defends Stick from taunts at school, but can’t keep either of them safe from their abusive parents. Bosten, who is gay, leaves home to protect himself from his father’s wrath, and Stick sets out to find him.

The book has been widely praised by critics, including School Library Journal, VOYA, Booklist, and Kirkus, and it received a starred review from Publishers Weekly. While some of the outlets note that the work is not for everyone, it still warrants inclusion in libraries and educational settings.

The school is in clear violation of their First Amendment obligation to keep material available for all members of the community and to not let one parent influence the availability of material. While the parent who filed the complaint may not want their child to read Stick, at least one parent in the community disagrees. In a report from KATU, a local news affiliate, Steffanie Colvig, the mother of a 8th grade student, is reading the material and hasn’t encountered anything she finds inappropriate for her child. “My real question is why?” she asks. “What makes that possible? If we have a committee process, why don’t we follow the recommendation?”

“Whether people like the material of the book or not, it is a fact that unfortunately those horrible things happen, and there are kids out there that connect to that,” Colvig adds. “They can see something in there that helps them feel inspired to get out of their situation.”

KATU also reached out to Smith about Phillips’ decision: