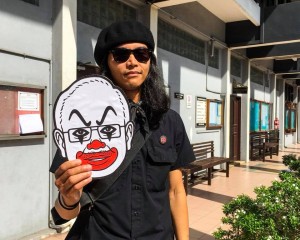 Malaysian graphic designer, artist, and activist Fahmi Reza has been sentenced to a month in jail and a RM30,000 (around $7,700) fine for uploading a sketch depicting Malaysian Prime Minister Datuk Seri Najib Razak as a clown. Reza was found guilty of spreading online content deemed “obscene, indecent, false, menacing or offensive in character with intent to annoy, abuse, threaten or harass another person.”

Fahmi originally posted the clown image on Instagram in January 2016 as a protest against Malaysia’s Sedition Act, which has been used to silence critics, including political cartoonist Zunar. Fahmi’s post read: “In 2015, the Sedition Act was used 91 times. But in a country full of corruption, we are all seditious.”

Fahmi was soon notified that he would be charged under the very same Sedition Act, which he has defiantly dubbed the “Hurt My Feelings Act.” He also faces a separate charge for digitally altering a Malaysian government takedown notice, which he used in a satirical Facebook post. Each count carries up to two years in prison and a fine of 50,000 Malaysian ringgit, or about $12,300.

Fahmi is appealing the decision, and he still faces the second charge. A stay was granted, so Fahmi does not need to await appeal in jail. However, he does have to pay the fine immediately.

As a cartoonist Fahmi did his job very well. This is what cartoonists, graphic artists or artists do. It is a practice all over the world that artists take a stand and criticise the government of the day.

That is why I find the judgment unacceptable. It is against the principle of freedom of expression guaranteed by our Federal Constitution. It is the basic right of any artist to express his art. That is what Fahmi did. It is nothing wrong. It is a very comical judgment.

Amnesty International Malaysia also decried the court’s decision. Gwen Lee, Interim Executive Director of the organization, said in a statement that Fahmi’s “sentence is yet another example of the continued crackdown on dissent by the Malaysian authorities.”

We’ll continue to monitor the story.