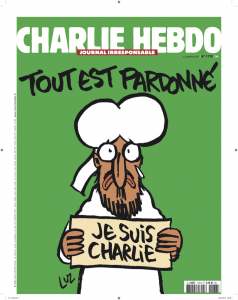 This year was the third annual Free Expression Awards, an honor designed by the Newseum and Newseum Institute in Washington, D.C. to recognize those who exhibit and inspire excellence and courage with their free speech. The winners this year included French cartoonist Laurent “Riss” Sourisseau, who survived the attack on his offices at Charlie Hedbo and has courageously continued producing work that exemplifies the promise of free speech.

Other honorees include Dr. John Carlos and Dr. Tommie Smith, the 1968 Olympians whose silent protest with bowed heads and raised fists sparked international debate about racism and protest rites that can still echo today in our discussions of athletes like Colin Kaepernick.

Thirteen journalists from four publications were also honored on behalf of all journalists who investigated and wrote about sexual misconduct and assault in the past year. “Their work broke through a dam of suppressed stories and silenced voices to reveal decades-long harassment throughout the American workplace, including media, film, sports, manufacturing, the arts and Congress.”

The Newseum, located in Washington, D.C., is dedicated to the mission of increasing the public’s understanding of the First Amendment and the significance in society a free press holds. The museum is designed to be interactive for the visitor to truly experience how news has shaped history and the world we live in.

The lifetime achievement in free expression award was given to Arthur Sulzberger Jr., former publisher of The New York Times and chairman of The New York Times Company for over twenty years. The paper has earned 60 Pulitzer Prizes in that time and consistently exemplified the power and reach of great journalism. In an environment where newspapers like The Times are now regularly called into question by their opponents as disseminating false news stories, this award reinforces the significance of the Free Press today.