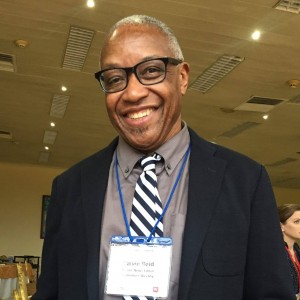 Freedom to Read Foundation (FTRF) announced the results of the 2018 election for the Board of Trustees. Among the new trustees is Calvin Reid, a crucial advocate in developing comics in the book trade. Reid, a senior editor at Publishers Weekly has covered First Amendment and freedom to read issues since he joined the PW staff in the 1980s. He has also overseen comics and graphic novel coverage at the magazine, the expansion of which over his tenure has been a key figure in establishing comics in the general book trade.

Reid’s his longtime efforts in raising awareness about comics as well as the graphic novel business profile were rewarded in 2006 when he was given the Bob Clampett Humanitarian Award. The award is presented each year during the Eisner Awards ceremony to an individual who has worked in comics and other popular art fields to help others throughout thier career. CBLDF founder and Advisory Board Co-Chair, Denis Kitchen, won the award in 2009, as well as CBLDF Board member Paul Levitz, and Neil Gaiman, who Co-Chair’s the Advisory Board with Kitchen, in 2008 and 2007 respectively.

The Freedom to Read Foundation is managed by a board of 15 trustees, 11 elected and four ex officio. Terms are two years, and board members may serve two terms. Current trustee’s include James LaRue, the director of ALA’s Office for Intellectual Freedom and Charles Brownstein, the Executive Director of CBLDF. Reid, and his fellow elected trustees Amanda Barnhart, Herbert Krug, and Barbara Stripling will begin their term after the June Freedom to Read Foundation annual meeting in New Orleans.