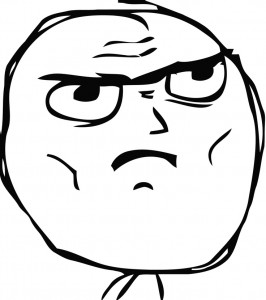 Rage comics in China are now under fire, with one of the countries most popular sites, Baozou, being targeted for a post from 2014. The post in question was a video of someone wearing a rage face mask making a joke about Dong Cunrui, a soldier who blew himself up to destroy a Nationalist party bunker in 1948 during the Chinese Civil War. On May 1st, China’s National People’s Congress enacted the “Heroes and Martyrs Protection Act,” making it illegal to mock communist martyrs and heroes.

Rage comics are crudely drawn (or photoshopped) with a few panels and a punchline at the end. As a meme they’be been popular in the U.S. at different points, but for the Chinese they’be become a staple of internet culture and subversive dissent. The Baozou comics site is so popular that just one of their rage comics has been optioned by Netflix for $30 million. Aside from drawn comics, Baozou expanded into making short videos with a host wearing a mask to look like one of the rage faces.

Baozou had more than 10 million followers on Weibo, just one of China’s social media sites that has banned the comics site. Weibo shut down 16 different accounts for failing to adhere to the “Heroes and Martyrs Protection Act,” at the behest of the Cyberspace Administration. And Baozou wasn’t just shut down on Weibo. Jinri Toutiao, China’s popular news aggregator, was the first to ban the comics site, and Youku, a popular video platform also banned the videos from the site.

Baozou’s CEO Ren Jian released a statement apologizing for their transgression of the law, and thanking their fans and the media for their strict supervision and complaints so that the company “can see [their] deficiencies clearly and do better in the future.”

This is par for the course in China, with Winnie the Pooh, and Peppa Pig both being recent victims of the country’s particular brand of humorless censorship. For Winnie, the crime was resembling China’s own President Xi Jinping a little too much. As for Peppa, the cartoon British pig she has been deemed “too gangster” and exemplary of a style of anti-authoritarian laziness counterproductive to the ideal communist.

PEN America released a special report this year detailing their concerns over the excessive censorship under the current Chinese regime.