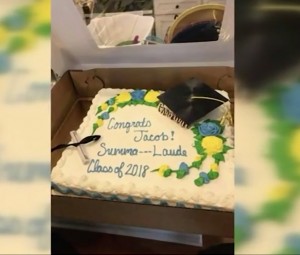 Koscinski, undeterred, simply used the “Special Instructions”” box to explain the Latin word, provide a link to a website that explains the phrase, and placed the order. But as anyone who has every used a “Special Instructions” box to order food online can guess, whether or not the employees bothered to read the instructions, they definitely did not heed them.

“My son was humiliated,” Koscinski wrote in a Facebook post with pictures of the cake.
Ok. I didn’t want to post but I cannot resist. I ordered Jacob’s graduation cake from Publix. A $70 cake!! He earned a 4.79 GPA. Publix refused to write the words Summa Cum Laude because I was using ‘profanity!’ They put three dashes instead of the word!
How utterly ridiculous and I will be speaking to a manager for a refund. Shame on you Publix for turning an innocent Latin phrase into a total embarrassment for having to explain to my son and others (including my 70 year old mother) about this joke of a cake. My son was humiliated!!! I seriously couldn’t make this crap up!!!!
Funny-not funny.
Edit: The person who picked up the cake on the day of the graduation did not know what I requested to be put on the cake.

Publix offered to remake the cake, but Cara Koscinski wasn’t interested since the party was over. They refunded her the cost of the cake and presented her with a gift card to their grocery store. According to The Post, “[The Assistant Manager] said she doesn’t want this to happen to anyone else in the future,” but as of the paper’s posting of the article on May 22nd, the system produced the same results when they attempted to get a similar message through the profanity censors.

While Publix’s intentions weren’t devious, the absence of common sense is inexcusable and sadly unsurprising. It seems often time censorship is employed to protect the reader from their own prudence. Given the frequency of cake court cases invoking the First Amendment in modern times, Publix might be best served by asking their employees to exercise their best judgement when it comes to icing, and make sure they start reading the “Special Instructions” section.

*It is pronounced “coom.”