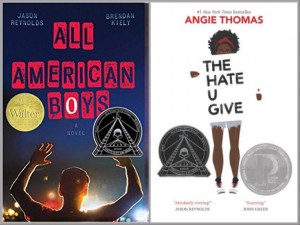 Community members, cops, and parents in one South Carolina school district are all pushing back against two summer reading books they believe propagate anti-police feelings. The books, The Hate U Give by Angie Thomas and All American Boys by Jason Reynolds and Brendan Kiely, were on a list of four titles for students taking an English 1 College Prep course. Both books mentioned have received numerous awards and accolades, including the Coretta Scott King Honor.

The president of the Fraternal Order of Police for Tri-County Lodge #3 told local news,

“It’s almost an indoctrination of distrust of police and we’ve got to put a stop to that. There are other socio-economic topics that are available and they want to focus half of their effort on negativity towards the police? That seems odd to me.”

Block neglected to mention that The Hate U Give also depicts a police officer as one of the strong moral centers, a father figure, and positive role model for the main character Starr in the book. Angie Thomas’ debut novel is about Starr Carter, an African American 16 year old girl, who witnesses her unarmed best friend, Khalil, shot and killed by a white police officer. Starr’s Uncle Carlos is a detective on the same police force and remains a strong counterpoint to the the officer who shot Khalil.

The other book being challenged, All American Boys by Jason Reynolds and Brendan Kiely, tells the story of Rashad, a black teenager, assaulted by a white police officer who mistakingly accused  him of shoplifting. The other main character Quinn, a white teenage boy who is very close to the offending officer, witnesses the attack on Rashad. The book rotates between the two boys’ POVs as they grapple with raising racial tensions in their school and community, and figuring out where they stand amid these tragic events.

Students only need to read one of the four books on the list for the summer. The other books on the list are Love Letters to the Dead and 23 minutes. According to the local news, the option of letting students decide for themselves what to read isn’t good enough – “the Fraternal Order of Police says the two anti-police books should be dropped from the list because they focus on negativity toward officers.”

Both books are inspired by the deaths caused by police violence against unarmed individuals plaguing the country in recent years. These deaths have led to large changes in the cultural landscape, creating huge protests, movements like Black Lives Matter, and strong divisions between neighbors based on everything from racial prejudice to gun control. These books offer a chance for teenagers to discuss these real-life situations, opening an important dialogue with their teachers and each other.

The school is reconsidering the books inclusion in the curriculum following an official request for reconsideration. CBLDF will keep you informed of all developments as they emerge in this challenge.