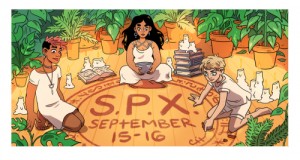 Join Comic Book Legal Defense Fund this weekend at SPX and meet amazing indie comic creators at special signings! Roz Chast, Jules Feiffer, David Small and more! Plus you can snag pre-signed copies of favorite graphic novels as donation rewards or become a CBLDF member and support free expression in comics! Find us at tables W 80 – 83 in the exhibitor hall!

For over two decades Small Press Expo, or SPX, has been a bastion for independent comics creators and readers. Held annually in Bethesda, Maryland it’s the premier East Coast indie comic convention and hosts the prestigious Ignatz awards. Comic Book Legal Defense Fund has a long-standing relationship with SPX, and excited to be attending this year and offering signings with some of the top independent comics creators in the business! Check out the schedule below.

Jules Feiffer is a cartoonist, playwright, screenwriter, children’s book author and illustrator, and member of the American Academy of Arts and Letters. Amongst his many awards, he is one of a handful of creators to win both the Oscar and a Pulitzer Prize, which was for his weekly editorial cartoons in The Village Voice, where he was employed for over 40 years. One of Jules first jobs in comics was as a writer on Will Eisner’s seminal weekly Sunday comic, The Spirit. He teaches a humor-writing class at Stony Brook Southampton College and lives in East Hampton, New York.

Roz Chast grew up in Brooklyn. Her cartoons began appearing in the New Yorker in 1978, where she has since published more than one thousand. She wrote and illustrated the #1 New York Times bestseller Can’t We Talk About Something More Pleasant?, a National Book Critics Circle Award and Kirkus Prize winner and finalist for the National Book Award; What I Hate: From A to Z; and her cartoon collections include The Party, After You Left and Theories of Everything.

David Small, author of the #1 New York Times best-selling Stitches, is the recipient of the Caldecott Medal, the Christopher Medal, and the E. B. White Award. He and his wife, the writer Sarah Stewart, live in Michigan.

Emma Ríos is a cartoonist based in Spain. She shifted her focus to a mix of both architecture and work with small press publishers until she started working on comics full-time in 2007. Having worked for Boom! Studios and for Marvel Entertainment (Doctor Strange, Amazing Spiderman), she returned to creator-owned comics in 2013, thanks to Image Comics; where she recently published I.D., a solo graphic novel, and co-edited the Island magazine. She currently co-creates Pretty Deadly with Kelly Sue DeConnick and Mirror with Hwei Lim.

Carey Pietsch graduated from Swarthmore College in 2010. She’s now living in Brooklyn, where she works as a cartoonist. She’s currently the artist on The Adventure Zone: Here There Be Gerblins. Previously, she was the artist on the Mages of Mystralia webcomic, Lumberjanes Issues 29-32, and Adventure Time: Marceline Gone Adrift. Her original comics Rift and The Witches’ Daughters appeared in SOI’s Comic & Cartoon Art Annual, 2015; Gleam was a part of the 2016 show. Her work has also appeared in several anthologies, including Chainmail Bikini, Oath, 1001 Knights, Blood Root, and Terrestrial.
When she’s not making comics, she’s probably playing a tabletop game, collecting more plants, or working on a goofy podcast about Animorphs.