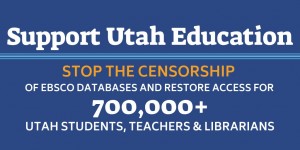 News just broke on Twitter that The Utah Education Network has voted to restore access to EBSCO for K-12 students of the state. According to a local news report at the beginning of October, the EBSCO shut down stemmed from one woman who found (in her words) “lots of yucky images” and reported them to a local government official. According to the library board’s documentation, that local government official was Senator Todd Weiler. At an October 1st library board meeting, the majority voted to keep EBSCO shut down until they looked into the issues further of ineffective filtering and possible pornography on the database.

EBSCO is used by school children and library patrons to cull search results to manageable amounts by providing full-text results from common periodicals, journals, and newspapers. The people fighting to remove services like EBSCO claim that it pushes pornography to the top of benign searches. As James LaRue, the director of the American Library Association’s Office of Intellectual Freedom writes in his response to recent attacks on databases, Education is not Pornography, “If middle or high school students are looking for sex on the internet, they do not start with library databases.”

This is all very similar to the recent lawsuit CBLDF reported on earlier this week, with EBSCO being attacked by a very small group of parents in Colorado who feel that the database “knowingly provides sexually explicit and obscene materials to school children.” And that’s not a coincidence that these cases are so similar. Beyond the Books, a local investigative journalism segment from Channel 2 in Utah, went looking for more information about Nicoleen Peck, the woman who first complained to Senator Weiler. They discovered, “Peck, the woman who discovered the questionable material, is a conservative blogger who has been working with the very parents in Colorado who shut down the website in Aurora.” Read the full article about what they uncovered here.

And while this recent news is great for Utah, don’t forget that on October 10th, a lawsuit was filed against EBSCO  and Colorado Library Consortium by The Thomas More Society on behalf of two Colorado parents who have been campaigning for two years to have EBSCO removed from libraries and schools. So the fight is far from over to protect intellectual freedom in classrooms and libraries. In Utah, a petition with over 500 emails was sent in support of EBSCO database services. Every voice does matter, so speak out for the right to read and support Colorado libraries with a phone call, email, tweet or facebook message so that they get the support they need to overcome censorship.

Congratulations to all the hard-working Utah teachers, librarians, students, and parents who successfully fought to protect their intellectual freedom. To learn more about the smear campaign that has been going on for years against library databases read Education is Not Pornography by James LaRue, or his in-depth look at the attacks on databases like EBSCO from last year, entitled False Witness.

← Get Your Classroom Ready for Halloween with The Misadventures of Salem Hyde
Exclusive Umbrella Academy and LumberJanes for CBLDF Retail Members! →