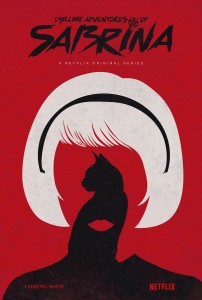 **Spoilers ahead for Season One, Episode Three of the Netflix show The Chilling Adventures of Sabrina that don’t affect the overall watching experience, but give away details from a single episode sub-plot**

The hit new show The Chilling Adventures of Sabrina is based on the wildly popular comic by the same name by Roberto Aguirre-Sacasa and Robert Hack in the Archie Comics Universe. Following the teenage witch, Sabrina Spellman, as she navigates friends, family, relationships, and the occult. Many might remember the sitcom version from the 90s, but the new Netflix version isn’t so much a reboot of that show, as a new interpretation of the 2014 reboot to the comic, which is much dark than its predecessor Sabrina the Teenage Witch.

Chapter Three of the first season, subtitled The Trial of Sabrina Spellman, begins with one of Sabrina’s friends, Roz, complaining about “the fascism afoot at Baxter High” where they go to school. When Roz goes to get her book report assignment approved by her teacher Mr. Garland, he denies her choice, because Toni Morrison’s The Bluest Eye has been deemed “problematic” and “controversial.” Roz tells her friends, “No one should get to decide what we can and can’t read.” Sabrina and Roz decide to take up the decision with Principal Hawthorne.

Hawthorne starts off the meeting by assuring Sabrina and Roz that they do not ban books at the high school, but The Bluest Eye “has very graphic passages” and that he is “certain Mr. Garland would have raised the same objections had [Roz] proposed A Clockwork Orange or Lolita.”

Roz retorts, “So you’re saying those books are banned as well?”

Principal Hawthorne tells Roz, “I’m saying that this is a public school and certain topics and titles have no place in the hands of impressionable youths.”

This inspires Roz to enlist her friends to help her check the library for a list of books that the card catalog says they carry but are controversial. When the girls can’t find any of the books, the librarian lets them in on a little secret – those titles have been checked out . . . for years.

The librarian in the episode calls it a “soft-purge”, denoting presumably that the administration quietly removed the texts without formal challenges or following the school district’s own policies with regards to challenging controversial texts.

James La Rue, the former director of the American Library Association’s Office of Intellectual Freedom, was generous enough to respond to CBLDF’s questions about real-life instances that mirror the show’s subplot. LaRue brought up a similar type of censorship that isn’t just on television and is a growing, pervasive form of censorship that’s hard to combat because it’s handled quietly on purpose to avoid controversy.

“In the profession, we call this ‘self-censorship.’ It can be tricky. Selection–choosing what to buy–isn’t necessarily censorship. Librarians can’t buy everything for their collections. But particularly in school libraries, staff may deliberately avoid anything with excessive cursing, LGBT, or sexual content, even when the books are well written, well reviewed, and age appropriate. Why? The fear of parental wrath or administrative censure.”

Roz asks rhetorically in the episode, “They’re just books, what are people so afraid of?” 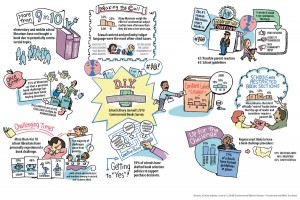 According to a Library Journal Study done in 2016, 25% of librarians who have faced challenges in the past say that they’ve allowed that process to affect their subsequent purchasing, but that statistic jumps to nearly half of librarians if the challenge came from an administrator. The same study showed that “self-censorship” is on the rise around the country, with some librarians blaming an increase in the graphic nature of young adult literature, and other librarians blaming society itself for being too closed-minded.

In the episode, the administrator in question, Principal Hawthorne, lets Sabrina and Roz know he contacted the school board and the PTA to review The Bluest Eye which presumably in Baxter High School constitutes the official educational material review policy. And that’s the perfect response to take – to follow the policies schools put in place for this exact reason. Understandably they can’t review every book in the world before opening the doors, so when a challenge arises, it’s best to follow one’s own policies.

The 2016 Library Journal study said that 77% of librarians who responded said that their school has formal procedures in place to handle reconsidering books and formal challenges to materials. That may sound like a lot, but as LaRue pointed out after the study was released, “those percentages are too low.”

“This is the piece that can be fixed. One hundred percent of schools should have a reconsideration policy,’ says LaRue. He adds that librarians working in schools without an official procedure should strongly advocate for one. ‘You don’t have to wait for a crisis to do something. It makes the controversy manageable.”

We asked James LaRue, what else teachers and librarians can do about the rising tide of self-censorship happening all across the country in places that are supposed to be committed to intellectual freedom. His response was,

“Talk about it. Raise the issue at staff meetings. Find champions among parents, and urge them to write letters to the editor, speak up at board meetings, and if they really want to make a difference, read and discuss these books with their children.

And let’s remember that books, particularly fiction, read for interest rather than information gathering, have been shown to greatly increase empathy and understanding. We could use a little more of that.”

In Sabrina, the school board tells them it will hold the review in three months time, and that might seem like a forever to a teenager, but at least they are handling the policy through the appropriate channels. One passionate teacher in the show comes up with a great solution to the problem, and institutes a Banned Book Club, with the first selection being The Bluest Eye. That’s a decision that CBLDF whole-heartedly supports, book clubs promote reading and discussion of great works which can only be a great addition to the community.

Read about one mom’s controversial book club to help process the ideas presented in difficult but worthwhile texts.

Already have a book club but want to bring more controversial comics in? Check out the CBLDF Discussion Guides and get your book club started reading Neil Gaiman’s Sandman, Alison Bechdel’s Fun Home, and many more great works!

Patricia Mastricolo is the Editorial Coordinator for the CBLDF. When she isn’t writing about free expression or comics, she spends her time in Brooklyn with a small cadre of disgruntled felines, reading horror, and listening to Bowie. You can reach her at Patricia.Mastricolo@cbldf.org