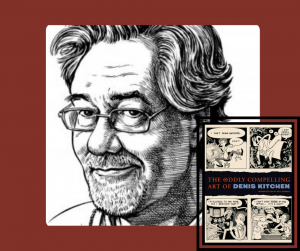 CBLDF Founder and Advisory Board Co-Chair, Denis Kitchen was a guest on S.W. Conser’s Words and Pictures radio show on KBOO FM dedicated to the visual arts. During their hour chat, Kitchen waxed eloquently about underground comix, Stan Lee as an unlikely pen pal, the genius of his friend Will Eisner, and the creation of Comic Book Legal Defense Fund.

Kitchen is an legend in the comics world, both for his own work (Check out The Oddly Compelling Art of Denis Kitchen to see more) and his contribution to the medium through publishing independent comics. At the start of his career in publishing he created a market through the unlikely venue of head shops (a type of store that sells glass pieces for smoking and related paraphernalia) and other odd ball type shops he felt meshed with the vibe of underground comix he published. Kitchen published work by Robert Crumb, Trina Robbins, Howard Cruse, and many more invaluable creators. He founded Kitchen Sink Press in 1970 which ran as an independent comics publisher through the 1990s, producing countless pieces of comics canon including Scott McCloud’s Understanding Comics and Charles Burn’s Black Hole.

What do Will Eisner and Sergio Aragonès have in common? They were two of the first cartoonists approached by Kitchen to help fund the appeal of Michael Correa, a comic book store manager convicted on obscenity charges in 1988. Kitchen didn’t official found CBLDF until 1990, after Correa’s case had been overturned. For the organization’s first 18 years, he served as its President, and nurtured it from a volunteer effort, driven out of an office at Kitchen Sink Press, to a professional institution with a full-time staff. Currently Kitchen is the Advisory Board Co-Chair, sharing responsibilities with Neil Gaiman. He continues to offer priceless wisdom and support in the fight for free expression, and according to the radio show CBLDF is still his favorite nonprofit.

There are two cuts of the interview, one for radio and an extended web-only version. Both can be played through the site or downloaded to listen at your leisure. The radio cut is just shy of 30 minutes and the extended is a bit over an hour. Both are great, but the comics inside baseball and behind the scenes anecdotes included in the extended make it well worth the listen. It’s a conversation reminiscent of the some of the best late night chats after a good day at comics convention. 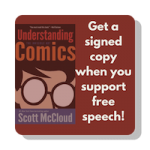 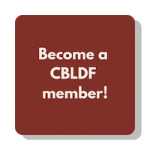 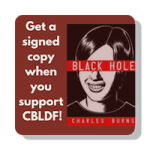 ← A Marvel in Her Own Right, G. Willow Wilson – She Changed Comics
CBLDF Exclusives – Rick & Morty, Lumberjanes – Signings, Programming, and More at Wondercon! →