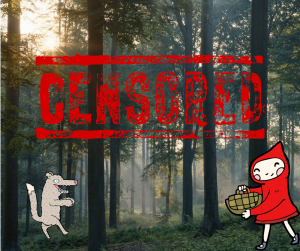 The Tàber school in Barcelona recently reviewed its 600 volume children’s library and determined that a third of the collection was sexist and without pedagogical merit, including classic fairy tales like Little Red Riding Hood and the legend of St. George. They removed the 200 volumes deemed misogynistic, and now other schools around the area are considering the same thing.

According to The Guardian, the group behind this purge is Associació Espai i Lleure who is in the midst “of a project that aims to highlight hidden sexist content.” They reviewed the texts with an eye for the characters’ genders, who spoke in the books, and the roles the characters perform. The 200 books purged were called out by the group for portraying “stereotypes” and lacking any “pedagogical value.” The group feels that if young children are exposed to outdated gender stereotypes it will normalize misogyny. Anna Tutzò, one of the parents who reviewed the books, complained that “society is changing and is more aware of the issue of gender, but this is not being reflected in stories.”

Well, of course, children’s literature is changing with the times, it’s especially clear when we see the myriad of challenges to LGBTQIA+ books that didn’t exist in the recent past. But it is unreasonable to expect books to change to match our current thinking long after they’ve been published. And it’s ludicrous to remove every text for being outdated in some way.

Another parent at one of the schools considering following in Tàber’s footsteps, said, “the type of books children read is very important, because traditional books replicate gender stereotypes, and it is good to have books that break these.”

What these schools and parents are forgetting is that these stories, that they are anachronistically calling out for gender stereotypes, raised generations of women and men who fought against those roles and created the slightly more enlightened world we live in today. Erasing the world’s casually sexist past doesn’t fast-track us into a utopia of gender equality, but rather leaves the world with the sort of temporary amnesia that welcomes a backslide into antiquated thinking masquerading as new ideas.

Parents and teachers are meant to put these stories into context because they contain more than just stereotypes, they often contain the origin of archetypes as well as literary foundations to a vast array of books, movies, video games, that children will revisit throughout their whole life. The Guardian pointed out that the Tàber school plans on evaluating the older children’s library, but without such a censorious hand, because they feel older children have a stronger ability to analyze the texts. Part of that ability to critically examine texts comes from reading these stories with adults and having the adults point out flaws and lessons.

Also, the answer in a library to any problem has never been, and will never be fewer books. The answer is always more books. Don’t remove books that don’t match every aspect of our current world in hopes of erasing an unpleasant truth about our past. Buy more books that demonstrate the changes to gender roles society has begun to display. Buy more books that rebuke stereotypes, defy expectations, and engage children about these norms. Erasing an unpleasant history of misogyny, not only asks people to erase a couple of millennia worth of stories but also dooms the world to repeat it in the future.