The American Library Association releases an annual list of the most challenged and banned books each year, and Drama by Raina Telgemeier holds the distinction of appearing more times than any other comic. It also holds the distinction of being one of the continuously best-selling graphic novels, it’s popularity undamaged by the frequent challenges to this cherished work. It’s recognized regularly for offering a realistic and positive view of young LGBTQ+ adults, and that has likely caused a fair amount of the challenges and bans. Take a look at ways to use Drama in your classroom or curriculum.

Strangely, while Drama is often challenged for being “sexually explicit,” the story is set in a middle school and has no sex at all in it. Furthermore, Drama has received numerous starred reviews and honors:

The book has a diverse cast of characters, including a few gay teens who either already knew they are gay or are slowly realizing it. That said, Telegemeier treats this as a non-issue, and aside from a few flirty kisses (one of Callie’s lands squarely on her crush’s cheek), there’s little depiction of romantic contact between any characters.

Given this confusion surrounding Drama and its inclusion on ALA’s frequently challenged list, we take a closer look atit in this post. We hope to help teachers, librarians, administrators and parents better understand how to use Drama in their homes, classrooms and libraries. (For a closer look at Persepolis, please read “Using Graphic Novels in Education: Persepolis.”) 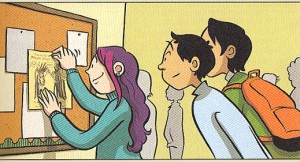 Drama is a funny feel-good book about navigating the trials and tribulations of middle school. It emphasizes the importance of finding one’s voice as well as emphasizing the need for teamwork and consideration. depicts school-girl crushes and travails with humor and sensitivity, relayed through her engaging text, wonderfully expressive characters, and her colorful and engaging visual montages. The art conveys a sense of place, touch, and feel. You can feel the red velvet seats and the pre-show jitters and excitement. You can feel the tension, you can feel the excitement, and you can practically feel the cannon’s wet confetti. Finally, Telgemeier mixes humor, tension, confusion, passion, and fun as she tells Callie’s story.

Drama, is set up like a play. It begins with an overture of musical text flowing from panel to panel, ending with three characters entering the stage. It has four acts that begin with the announcement of this term’s play and continue with casting, directing, and preparing for opening night. There is an intermission during which we see guests entering the theater as the stage crew works frantically to set the stage, and then an entr’acte, leading into a fifth act, covering the three nights of the play, and the final act, detailing the aftermath of the play and its players. While set up like a play, and following Eucalyptus Middle School’s Drama Club production of “Moon Over Mississippi,” Drama is more about central character Callie and her friends than it is about the play. We follow Callie as she navigates her friendships and school crushes while creating a set worthy of Broadway within her middle school’s paltry budget. 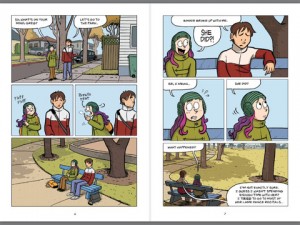 Act 1 begins with Callie walking home from school with Greg and his younger brother Matt. Matt’s hoping Mr. Madera will let him operate the spotlights again this year, even after a slight debacle last year. Greg then asks Matt to go on without them because he needs to talk with Callie. He tells Callie he just broke up with Bonnie, and while Greg is upset, she’s thrilled and gives him a peck on the cheek. Over the next few days Greg ignores and avoids her, and Callie finds out he’s back with Bonnie. Callie, feeling confused and rejected, realizes she’s got to get over this crush. She gets more and more involved with the drama club, designing the play’s sets (including a confetti-shooting cannon and a leaf-dropping magnolia tree). At the same time, she meets two twins, Jesse and Justin. Might Jesse be her new crush?

There are a lot of things that make this book special. For one, Callie is true-to-life. She fumbles with her hair and checks her breath before talking to Greg, one of her crushes. She later frets whether Justin likes her and finds the courage to ask them out when he fails to do it himself. Then, there are her passions. She loves stage and set design and can’t wait to show Justin her favorite book of all time, “published in 1932 and reprinted thirty-four times, it includes photographs of Broadway sets and stage design from the nineteen-teens and twenties.” 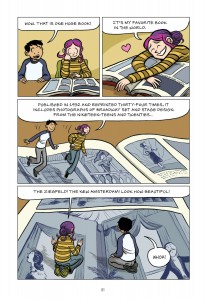 Telgemeier’s art is another special facet of this book. The art and text weave the story, alternating between whether the art or text has the stronger voice, while both are equally engaging. One outstanding example, however, of Telgemeier’s powerful visual storytelling comes as Callie shows Justin her favorite book. In the first few panels, Callie leads Jesse to the book (as Justin checks out some manga). Taking it out of its shelf, Callie hugs it, and in the next panel we see her and Jesse walking into the book, sitting on the pages as if they’re sitting in the sets themselves as the book, at least for Callie, becomes larger than life.

Then there’s Callie herself. Callie’s ability to be so swept away in her passions makes her even more endearing and real. We love her quirkiness, her focus, and her determination as well as her vulnerability and cluelessness about boys. Finally, there’s her inner strength that is so engaging, empowering, and refreshing. Callie speaks her mind, and while often insecure and uncomfortable with certain parts of herself, she’s fine with the fact that she can’t sing, she embraces and follows her ambitions, and she never lets her relationships or felled crushes diminish her confidence or her dreams. 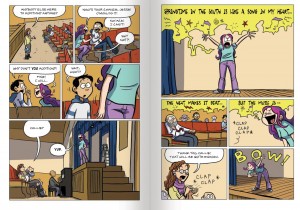 Finally, there’s Telgemeier’s portrayal of diverse characters from the stage crew — from geeks to the cool kids and jocks. There are kids of different ethnicities and cultural heritages, and all of them, regardless of color, background, size, or shape, are wresting with who they are. This in part,is why a few characters’ discoveries or realizations that they are or may be gay are such a non-issue. In fact the characters’ announcements that they are or may be gay are the only parts of the story in which there actually is no drama.

In short, this is a coming-of-age story as a young teenager learns to follow her passions, navigate friendships and crushes, and learns, along with her friends and peers, how to feel comfortable within one’s skin while embrace personal strengths, weaknesses, and quirks. 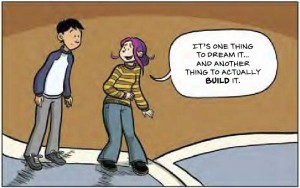 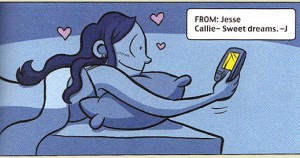 In graphic novels, images are used to relay messages with and without accompanying text, adding dimension to the story. In Drama, Telgemeier deftly weaves story and background with image, text, and design. Reading Drama with your students allows you to analyze, discuss, and learn how Telgemeier uses page and panels, text, and images to relay complex messages. For example: 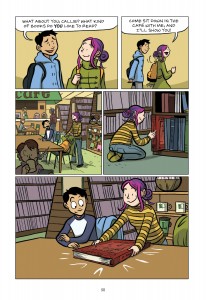 For greater discussion on literary style and content, here are some prose novels about growing up, being a pre-teen/teen, and the challenges of middle school and high school that you may want to read and pair with Drama: 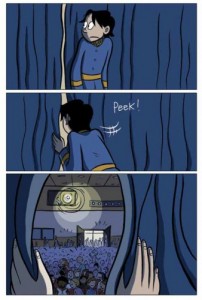 Following the teaching and discussion suggestions above, Drama can be used in classrooms to meet Common Core Standards, as detailed below. Note that his section uses the Common Core Anchor Standards for College and Career Readiness for Reading, Writing, and Speaking and Listening: