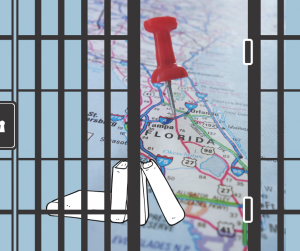 As book censorship in prisons gains more media attention, more journalists and nonprofits successfully gather further proof of the rampant First Amendment Rights violations happening to inmates all over the country. The latest state to be exposed for disregarding prisoners’ right to read is Florida. Human Rights Defense Center (HRDC) recently shared two lists: one of publications banned since 2012 and another of reading material banned from 2009 – 2011. Just a cursory glance over the 20,000 publications offers a huge selection of comics and graphic novels that are deemed to be a threat to safety and security in prison, including titles like Absolute Watchmen, Adventures of Superman, Blade, The Walking Dead, and even Stan Lee’s How to Draw Comics the Marvel Way.

The fact that Florida is unnecessarily censoring comics in prison shouldn’t come as a surprise. The state has been mired in an escalating battle with Prison Legal News over a statewide ban on their publication in jails. PLN, a prisoners rights publication under the umbrella of HRDC, focuses on providing resources to the incarcerated population. Recently the case was submitted to the Supreme Court who unfortunately refused to hear the appeal.

PLN released a statement after these lists were released, highlighting books that are critical of the prison system being miscategorized as a threat to the security of the prison. It is vague language in the Florida statue the creates a loophole that allows their Department of Corrections (FDOC) to ban books and magazines at will. Some examples PLN pointed out include The Disciplinary Self-Help Litigation Manual; The Federal Prison Handbook; 23/7: Pelican Bay Prison and the Rise of Long-Term Solitary Confinement; and Coming Out of Concrete Closets, a look at the LGBTQ+ experience in prison. They also noted books like Danish: A Complete Guide for Beginners; Exotic Chickens: Coloring for Everyone; and Advanced Dungeons & Dragons to demonstrate the far reach of items these lists are comprised of.

Kelly Jensen wrote about the ban for Book Riot,

Disallowing books from the hands of those who are experiencing incarceration infringes not only on their First Amendment rights, but it also continues to oppress those who are already experiencing marginalization. Legal aid books, as well as personal development books, like those banned in Florida, further ensure that populations like these are left on the outside, unable to educate themselves about their condition and work toward not only bettering themselves, but also toward justice.

Comics, while often overlooked by media outlets analyzing these huge lists of books, are an amazing resource to increase literacy, both verbal and visual, and create a lifelong love of reading. Watchmen deals with themes of fascism, free will, moral relativism, questioning authority, and taking responsibility for one’s own actions. A recent Kids’ Right to Read Project letter from CBLDF points out, “Over its run of more than 30 volumes, The Walking Dead explores many of the emotional, social, and intellectual issues teens grapple with every day, while also providing vital ways of thinking about topics examined in the course of their education.”

But even if comics weren’t an amazing resource for adults and juveniles alike, and even if there weren’t studies demonstrating how education is the key to reducing recidivism, it would still disregard First Amendment rights to deny books that pose no threat. The best phrasing to the heart of this matter comes from the 2005 case, King vs. Federal Bureau of Prisons, “Freedom of speech is not merely freedom to speak; it is also freedom to read. Forbid a person to read and you shut him out of the marketplace of ideas and opinions that it is the purpose of the free speech clause to protect.”; King v. Fed. Bureau of Prisons, 415 F.3d 634, 637 (7th Cir. 2005)