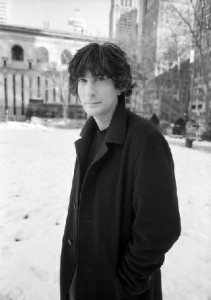 Neil Gaiman is celebrated for his creative works which invoke human values, belief systems, and decisions in a way that has resonated with many generations. His energies on the page are enough to merit him all the recognition he has received, but his efforts go beyond storytelling. Outside of his creative contributions, Neil has stridently directed his energies towards working as a force for good. Today, on the occasion of his fiftieth birthday, the Comic Book Legal Defense Fund salutes Neil and the good works he’s accomplished.

Neil’s association with the Fund began in the early 1990s. Sandman, his epoch changing comics turned graphic novel series, was rising to prominence, and the Fund was in its infancy. At the time, CBLDF was deep in the throes of our work defending cases on two fronts – Mike Diana in Florida and Paul Mavrides in California. In both cases, the stakes were extremely high. Mike Diana was facing criminal obscenity charges for the comics in his zine Boiled Angel. Mavrides, a co-creator of the Fabulous Furry Freak Brothers, was being shaken down by the California State Board of Equalization, who were alleging that his original art was not a protected manuscript, but a commercial item to be taxed. In both cases, cartoonists were being bullied by the authorities. In both cases their First Amendment rights were in the crosshairs. Neil enlisted to help. Thus was born the first of his Guardian Angel tours.

As a young organization, the CBLDF was barely able to maintain the fundraising required to manage both cases, and the firestorm of incidents that popped up on a frequent basis, so Neil’s support helped raise both urgently needed funds and awareness. Neil has often stated that after witnessing the excesses of England’s censorship, he found the United States refreshing because our First Amendment guarantees absolute freedom of expression. His work on behalf of the Fund celebrated free expression and educated people about our work.
As the nineties wore on, Neil continued to tour on behalf of the CBLDF, ultimately raising in excess of $100,000. He brought dozens of his peers into the fold, and raised awareness to tens of thousands of people who may not have otherwise been invested in the organization’s work. In recognition of his efforts, the CBLDF named him a Defender of Liberty in 1993. Later that year, he joined the Fund’s board of directors, a position he holds to this day, where he spurs on new fundraising and education opportunities for the Fund and our mission.

In his time at CBLDF, Neil has been an astonishingly energetic booster for the organization, tirelessly devoting himself to creating benefit readings, signing books, and creating special projects. But his most sincere, and strident contribution has been nudging the organization towards providing more and better education tools, which started with this website and will continue to take shape throughout the coming year.

Neil’s philanthropy for the CBLDF is extraordinary, but it doesn’t stop there. He has also done work to benefit the First Amendment Project, AIDS Awareness, Haitian earthquake relief, and countless small charities. He also provides education to aid creative people in establishing wills. Throughout he gives openly of his time, talent and energy to do good, and to aid organizations that help people in their mission. In acknowledgment of this work he was awarded the Bob Clampett Humanitarian Award in 2007 by Comic-Con International.

On the occasion of Neil’s fiftieth birthday, it’s natural to celebrate his stories, his collaborations, and the art he’s given the world. But we think Neil’s true measure is that he is not content to merely create good work, he is compelled to do good for its own sake.

Please consider making a contribution to CBLDF. Also visit the CBLDF Rewards Zone, where a number of signed Neil Gaiman items are available.