Today is the last day to preorder the CBLDF Liberty Trading Cards in Previews! Retailers and Fans, please order generously!

We’re very lucky to have such great partners with Cryptozoic Entertainment. We at CBLDF hope that you will support our collective efforts to raise funds to that allows CBLDF to continue our mission protecting the First Amendment rights of the entire comic book community. Never forget: We’ll be there for you when you need us.

As everyone already knows, Stan Sakai is the incredibly talented creator of Usagi Yojimbo. Every time I go into a comic book store or a public library, I’m quite blown away by just how many Usagi Yojimbo comics, trade paperbacks and monthly comics Stan has produced since 1987.

Usagi Yojimbo is a creator-owned comic book, and Stan is not only an avid supporter of Creator’s Rights, but he’s also been a tireless champion of CBLDF. He’s been incredibly generous donating his time and talent to the Fund. And he’s answered the call once again by allowing CBLDF to ask other creators to draw some original one-of-a-kind sketch cards using characters from the Usagi Yojimbo universe.

One of the great things about the CBLDF sketch cards is that artists get to draw characters that they may never have had the opportunity to take a whack at before. I have to tell you, flat out, we have received a lot of Usagi Yojimbo cards. So many artists wanted to step up to bat and swing for the fences drawing Usagi Yojimbo.

So, here is a very small sampling of those cards: 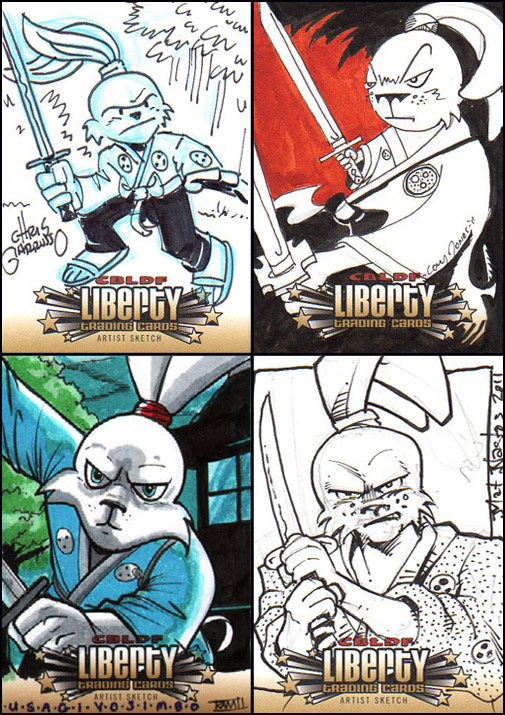 Starting at the top and going clockwise the artists are:

I’ll end on a tease. While I was wandering the floor of the Anaheim Comic Con a few weeks back, I ran into Dan “FragaBOOM” Fraga. I’ve known Dan since he was a kid. I asked him if he wanted to contribute, and he was rip-roaring-ready to go in a way that you can only understand if you know Dan.

He’s been rendering a series of cards that all connect together into one larger illustration but all stand alone just the same. (Yes, it will drive collectors more than a little crazy!) FragaBOOM sent me pics of the works in progress and I’m going to do the same. Here’s the first look-see:

Come back on Tuesday for more!