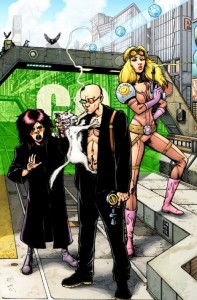 Manning asked Augér to describe the project in two sentences:

Transmetropolitan: All Around the World is an art book.  It is a book created for the purpose raising money for the comics community through donations to the CBLDF and the Hero Initiative.

The Transmet art book is a unique opportunity to see the borderline-insane world of Transmetropolitan through the eyes of a broad spectrum of artists and writers who have one thing in common: They’re all fans.

Proceeds from the sale of Transmetropolitan: All Around the World benefit the First Amendment work of CBLDF. A limited number of copies of this gorgeous album will be available from CBLDF in late spring.

You can find the in-depth interview with Augér and Venters along with some images from the upcoming release on Bleeding Cool.