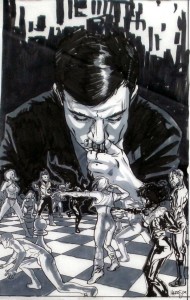 Comic book artists nationwide are shocked by the details of CBLDF’s Canada Customs case, and are supporting the CBLDF’s efforts to raise $150,000 to fight the case by contributing original art being auctioned right now to benefit CBLDF!

This week on eBay, the CBLDF is proud to offer original art contributed by legendary creators including Bernie Wrightson, David Lloyd, Cully Hamner, Tony Harris, Camilla d’Errico and many more. The next $30,000 payment in this case is due this September, and these auctions will be crucial to helping CBLDF contribute that expense.

Right now the CBLDF is providing aid to an American comic book reader who faces a mandatory minimum sentence of one year in a Canadian prison and registering as a sex offender because Canada Customs officials alleged that Japanese horror and fantasy comics on his laptop were child pornography. He was wrongfully accused of this heinous crime after an intrusive search of his suitcase, laptop, iPad and cell phone when he entered Canada to visit a friend. Although the images Customs officials flagged are expressive art and from comics that are for his private reading, he must now defend himself against these false charges in court.

This case impacts the rights of readers and artists traveling in an increasingly digital world, and it also affects the expressive freedom of comics creators. CBLDF’s aim is to establish a precedent that protects comics and reader privacy at the Canadian border, and, hopefully, influences courts at home.

Bidding on this round of auctions is open now and runs until Sunday, September 11th.

Learn more about the CBLDF’s important work on the Canada Customs case here.

Beyond bidding on these auctions, you can also help by making a cash donation or becoming a CBLDF member. If you would like to contribute a piece of original art or rare comic book merchandise to be auctioned, please contact Development Manager Alex Cox.