Last weekend the CBLDF team was at C2E2 in Chicago where we launched a huge t-shirt project with Threadless, delivered a presentation on the history of comics censorship, signed up dozens of new members, and raised more than $7,300 for our important work. Deputy Director Alex Cox and I were there alongside extraordinary volunteers Maggie Roll and George Folz whose hard work helped make this show such a great event.

To a large extent, the CBLDF’s roots are in the Chicago area. Our first case erupted in nearby Lansing, IL and was ultimately litigated by Burton Joseph, who appealed the case and won. Burt was a pillar of both the First Amendment community and the Chicago legal community. He was a lawyer for Playboy in that organization’s heyday, and had great stories to tell about that era. He went on to help establish both the Playboy Foundation and the Media Coalition, and was the Fund’s general counsel until he died in 2010. Because of Burt, and the Midwestern roots of the organization, Chicago has always been a stage for CBLDF events, and remains one of the Fund’s most supportive cities. Evidence of that was apparent at this show where we signed up more memberships and gave away more member appreciation rewards to card-carrying members than we have at any other con this year.

On Friday night we hosted a party with Threadless, the Fund’s newest corporate member and another great Chicago institution. The Threadless Atrium is an amazing space, with art covering the high walls, a cool gaming area, and all kinds of other fun amenities. They opened their space to CBLDF members and supporters for a party with vintage video games and a fashion show kicking off the new Comics-On Tees line, featuring a story by Jeffrey Brown who was on hand to mingle with his fellow CBLDF supporters. 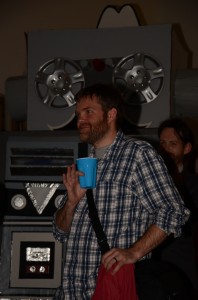 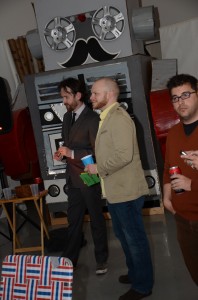 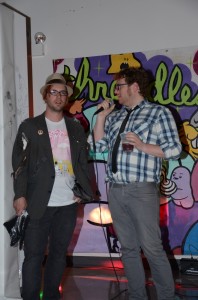 The crowd having fun: 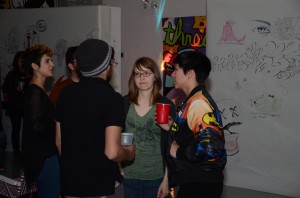 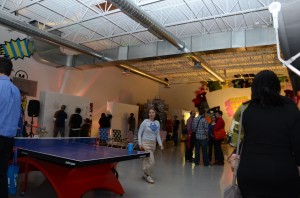 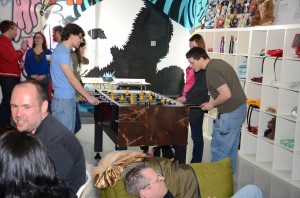 The most exciting news of the night was that Threadless is going to be producing a benefit Comics-On Tees line for the CBLDF featuring the talents of Ben Templesmith, Brandon Graham and John Cassaday illustrating a poem by the one and only Neil Gaiman! A fourth shirt will be designed by a member of the Threadless community, and the line will launch this summer. To get in on the fun, check out the full project details here.

Back at McCormick Place, Alex had a magnificent booth display set up that was jam-packed with signed graphic novels, prints, and t-shirts. We’re extremely grateful to the folks at ReedPop who contributed our space and gave us an excellent spot on the floor where we were able to meet supporters. There were a lot of people new to the convention experience at C2E2, and who’d never heard of the Fund, which made the show a great opportunity for us to perform education work. We distributed hundreds of informative comics and pamphlets about the legal issues we manage.

We continued our education work on Sunday when I gave a panel on the history of comics censorship that was well attended. This is the first time I got to discuss the full details of the Ryan Matheson case as part of this presentation, and was also the first to include new research I recently did on the Zap #4 obscenity conviction. Joe Sergi wrote up a terrific summary of the program that he augmented with his own additional research. You should check it out here.

On the whole, this was the most successful C2E2 to date. After three years of building, attendance was finally strong, showing that it’s now on the Chicago comics community’s map. The Fund is grateful to ReedPop for contributing our space and programming time, to Archaia for assisting us with our freight, to our terrific volunteers George Folz & Maggie Roll, and most especially to the supporters who contributed to our work during the event.

Next up for CBLDF is the LA Times Festival of Books at USC where Alex Cox will be set up this weekend. My next trip is to Portland, OR in 2 weeks for the Stumptown Comics Festival. If you’re in either city, we hope you’ll come out and say hello – we love to meet our supporters!

← Kurt Vonnegut’s Letter to the Man Who Burnt His Books
CBLDF’s History of Comics Censorship Presentation, Annotated by Joe Sergi’s Cup of Geek →