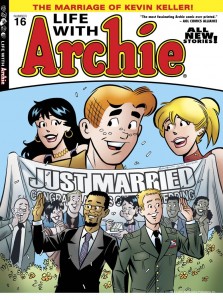 The last decade has seen a spate of LGBT characters introduced, ‘outed,’ or united in marriage with same-sex partners in mainstream comics. In 2006, DC’s Batwoman was reimagined as a lesbian. In 2011, Archie Comics introduced its first openly gay character, Kevin Keller — and less than a year later celebrated his wedding. Marvel’s Northstar, a member of the X-Men who has been openly gay since 1992, will be married in Astonishing X-Men #52, to be published later this month. And finally, DC recently revealed that the new parallel-Earth Green Lantern is also gay.

Unfortunately, these LGBT storylines have drawn criticism and calls for censorship from some quarters, particularly the group One Million Moms, a subsidiary of the American Family Association. The moms have pressured retailer Toys ‘R’ Us not to stock the Life With Archie issue featuring Kevin Keller’s wedding, and later blacklisted both DC and Marvel for “placing these gay characters on pedestals in a positive light,” according to a post from ICv2. But as Alan Kistler points out in an extensive post for Comic Book Resources, LGBT characters and themes have a long history in comics, despite the self-censorship that ruled the industry for decades.

In the 1940s and ‘50s, says Kistler, comics came under fire (often literally, as they were collected and burned) as a bad influence on children. Dr. Fredric Wertham, a psychiatrist and one of the most prominent anti-comics crusaders, claimed “that the stories inspired children to embrace anarchy, violence, crime and homosexual behavior.” In order to deflect these charges, the industry formed the Comics Magazine Association of America, which was tasked with drawing up a set of standards — the infamous Comics Code Authority. Among the arcane rules to which CCA-approved comics now had to adhere were these regarding sex and romance:

2. Illicit sex relations are neither to be hinted at or portrayed. Violent love scenes, as well as sexual abnormalities are unacceptable.

4. The treatment of love-romance stories shall emphasize the value of home and the sanctity of marriage.

7. Sex perversion or any inference to same is strictly forbidden.

While these rules did not explicitly forbid LGBT storylines or characters, that was how they were generally understood and applied, says Kistler:

What constituted ‘sexual abnormalities,’ ‘perversion’ and ‘any inference’ was completely left to the discretion of the CCA Administrator. So although it didn’t say ‘homosexuality has no place in comics,’ that’s how the Code chose to use it, particularly in conjunction with the rule #4. Having LGBT characters would be an inference of ‘perversion” or ‘abnormalities’ that went against the ‘sanctity of marriage.’

Ironically, the character of Batwoman, who would later be reimagined as a lesbian, was actually introduced in 1956 so that Batman could have a female love interest — thereby dispelling any suggestion of a homosexual relationship with Robin.

The Code continued to stifle free expression in American mainstream comics well into the 1970s and ‘80s, even as they were sold alongside underground comix and Japanese manga which featured storylines that were not CCA-approved. For instance, says Kistler, X-Man Nightcrawler’s origin story was altered to conform to the rules:

Nightcrawler was born with a demonic appearance (indigo skin and fur, golden eyes, fangs, strange digits, tail) and had no idea who his parents were. When he met the mutant shape-shifter Mystique, he was amazed that her true appearance involved eyes and skin color identical to his own. Some believed that this meant the shape-shifter was Nightcrawler’s mother. But Mystique was often seen in the company of a woman named Destiny and the original intention was that they were lovers. What’s more, a story was going to reveal that Destiny was actually Kurt’s mother and that Mystique, while in the form of a man, had been his father. This story was given a definite ‘no’ and so Mystique was indeed revealed to be Nightcrawler’s mother.

In 1979, the character Northstar (Jean-Paul Beaubier) was created by writer/artist John Byrne. Northstar was always intended to be gay, but in the early days this could only be implied, never stated outright. A 1987 storyline in which he exhibited signs of illness was originally intended to reveal that he had HIV or AIDS, but this was quashed by the Code. Two years later, the Code was finally revised to allow LGBT characters, and Northstar was definitively revealed to be gay in 1992, in Alpha Flight #106. Just last year the Code was scrapped altogether, and CBLDF took control of the infamous Seal of Approval.

Kistler’s full post is well worth a read and can be found here. For more on the history of the Comics Code Authority, see Dr. Amy Nyberg’s article for CBLDF here.