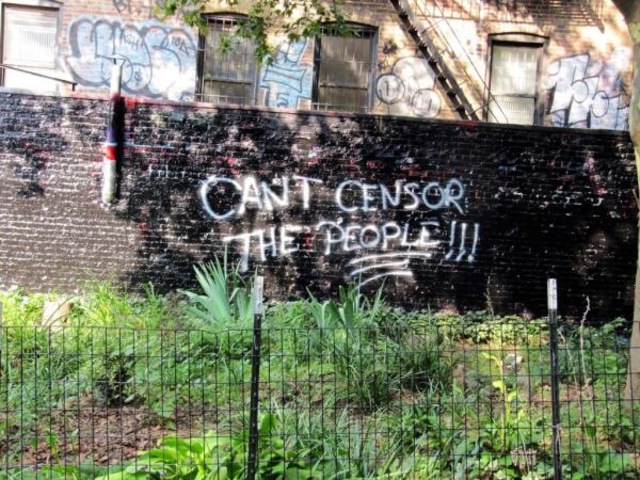 On July 24th, the New York City Police Department sent two plainclothes cops to paint over a mural that had listed the NYPD alongside multinational corporations and government agencies under the headline, “Murderers.” While artist Alan Ket had permission from the wall’s owners, the NYPD allege that community complaints about the mural led to their decision to effectively erase the message with black paint. Both the original mural and subsequent police action were controversial, and now, less than two weeks later, a new message has been scrawled onto the black wall in white paint: “Can’t Censor the People!!!”

The “Murderers” mural posits “We know the real Murderers” over a string of coffins inscribed with various corporations and government agencies, including McDonald’s, Haliburton, Bank of America, Monsanto, the Food and Drug Administration, and the Bureau of Alcohol, Tobacco, and Firearms. Ket includes political ideas like War and Capitalism, and tucked in between coffins for Shell Oil and the Environmental Protection Agency, rests one for the New York Police Department.

The brick wall belongs to New Edition Cleaners in Inwood, Manhattan, and owner Marina Curet has given local artists permission to paint on the wall during the five years she has owned the business. Alan Ket has been one of those artists:

Ket has been painting murals on the side of New Edition Cleaners ever since he noticed the graffiti-laden brickface and decided to take responsibility for the wall. “I decided to adopt the wall since I was already a customer there, and promised that I would do something good,” Ket said. He said his topics have touched on political issues before.

Ket further told Farran Powell and Carla Zanoni with DNAinfo.com about the inspiration for the mural:

He said this mural was inspired by the Broadway musical “Fela!” about the life of Nigerian afrobeat founder Fela Kuti. One of the scenes of the play includes a parade of coffins dubbed with the names of organizations that commit atrocities in Africa. He decided to do something closer to home, focusing on police shootings in New York City. “I was inspired by the unarmed Ramarley Graham shooting in Bronx and the trend in police shootings,” said Ket, who painted the mural with two guest artists.

Indeed, given the response from the NYPD to cover up the mural, it’s their inclusion that has become the center of the controversy. According to DNAInfo.com, which describes itself as a “hyper-local news source, covering New York City’s neighborhoods,” the NYPD has offered conflicting reasons for their actions, blaming both the community and the building’s owners:

NYPD brass engaged in a game finger-pointing Wednesday, saying police removed the mural at the request of community leaders, despite having earlier said it was because of resident complaints. Commissioner Raymond Kelly said the department’s “anti-graffiti program,” which is active throughout the city, was responsible for removing Alan Ket’s mural. […] “Community leaders there and the owner of the building wanted the mural, if that’s the proper name for it, removed,” Kelly said during a press conference Thursday. “So we did it, and that’s what we do. We do it throughout the city.”

New York Magazine‘s Joe Coscarelli’s story on the mural raises the concern of some members of the community over who set the removal of the mural in motion when he writes that “whether it was neighbors or community leaders or the police’s own whims that sparked the original NYPD paint job remains unclear,” and noting that “no elected officials nearby have spoken out against the graffiti.”

The silence from elected officials has not been mirrored by the community. There has been heated discussion of the incidents (Ket’s original mural, the police paint-over, and the “Can’t Censor the People” response) on the Inwood Community Group’s Facebook page, with the debate largely located in the comments section of several posts.

In the larger context of the debate over the various paintings and re-paintings on the wall are the chilling comments New Edition owners have made about the direct police involvement in censoring the wall as a place for free speech. According to DNAInfo.com, “Officers visited the store on Monday, telling owners that the painting needed to come down and calling the message a ‘bad idea.'”

“I can’t confront them, because I don’t want problems,” New Edition Cleaners owner Marina Curet, who has owned the business for five years, [tells DNAinfo.com] in Spanish. “There is no freedom of expression. It’s a bomb, and now here I am in the middle of a bomb.”

Alan Ket’s take on the matter is that “What actually happened was that the police, under the guise of community leaders or community complaints, took it upon themselves to remove a piece of art. This is highly problematic in a country where we pride ourselves on having freedom of expression.”

[Ket] said the landlord of the Inwood building where his work has been on display for more than five years told him his art now needs to be approved by the NYPD. “This wall is being censored by the NYPD,” Ket told DNAinfo New York over the phone Wednesday afternoon. “I told him I found it kind of strange he would feel he needed to get approval or permission or run anything by the police, but he said that he doesn’t want any problems with the police, that the police are a bit threatening,” he added.

The idea that the police of the 34th Precinct are now acting as censorship police has prompted one artist to produce the following image of a police officer acting as art critic. It’s an effective design, but misses the larger issue. An art critic, after all, is simply a person with an opinion, and officers are free to dislike Ket’s mural or any other piece of art. The issue here, however, is not one simply of opinion, but one of silencing the right of an artist to let his opinion be known by controlling the space that Ket and other artists paint on through forceful intimidation.