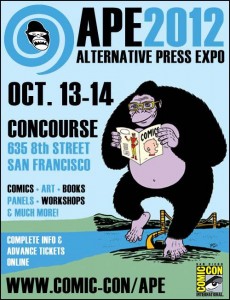 The organizers of the Alternative Press Expo are hoping to break last year’s record-setting attendance with this weekend’s festival, and CBLDF will be on hand to help make that happen! The West Coast’s premier celebration of independent comics, APE 2012 goes down October 13 and 14 at the Concourse Exhibition Center (635 8th Street) in San Francisco, and you’ll be able to find CBLDF at booth #318, where we will have an exciting array of signed premiums and exclusive autograph sessions with APE Special Guest Ben Katchor!

SATURDAY, October 13, 12:00 p.m.
CBLDF: The History of Comics Censorship—Learn the shocking history of comics censorship and how even today comics and the people who make, sell, and read them are still threatened. CBLDF online editor Betsy Gomez tells the sordid tale, from the public book burnings and Senate hearings that led to the Comics Code Authority in the 1950s through the attacks on retailers in the 1980s, artists in the 1990s, and readers today.

CBLDF is delighted to host APE Special Guest Ben Katchor for two exclusive signings! Katchor’s illustrations have appeared in Metropolis Magazine, The New Yorker, and his books include Julius Knipl, Real Estate Photographer, The Beauty Supply District, The Jew of New York, and The Cardboard Valise (all Pantheon Books).

You can find Katchor at CBLDF booth #318 at the following times: