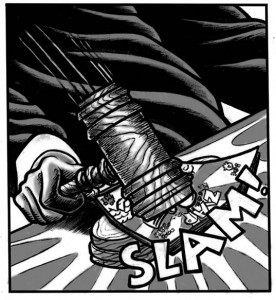 In a press release issued this week, the Department of Justice announced that Christjan Bee, 36, of Monett, Missouri, pleaded guilty before U.S. Magistrate Judge James C. England to possessing obscenity for a collection of comics on his computer. Government prosecutors are recommending a prison sentence of three years without parole.  Bee did not contact the Comic Book Legal Defense Fund for assistance.

The DOJ’s statement said that a forensic examination of Bee’s computer produced “a collection of electronic comics, entitled ‘incest comics.'” The comics are described to contain “multiple images of minors engaging in graphic sexual intercourse with adults and other minors.”  The DOJ asserts that the comics lacked serious literary, artistic, political or scientific value — areas that would have been tried if Bee’s case went to trial.

Bee’s case came to the attention of the government when his wife contacted authorities. The DOJ states, “On Aug. 8, 2011, Bee’s wife contacted the Monett Police Department and reported that she had found files she believed to be child pornography on a computer used by her husband. Police officers executed a search warrant at Bee’s residence and seized his computer.”

The CBLDF is gathering copies of the plea agreement and other court documents before venturing an opinion about Bee’s case.

Bee is the most recent comics reader to be prosecuted and convicted under the PROTECT Act (Section 1466A of the United State Code). The government previously secured a guilty plea from Christopher Handley in a case where CBLDF was a consultant, but did not manage the defense.

According to United States Code, Section 1466A, it is illegal for:

Any person who … knowingly produces, distributes, receives, or possesses with intent to distribute, a visual depiction of any kind, including a drawing, cartoon, sculpture, or painting, that –
(1)(A) depicts a minor engaging in sexually explicit conduct; and
(B) is obscene; or
(2)(A) depicts an image that is, or appears to be, of a minor engaging in graphic bestiality, sadistic or masochistic abuse, or sexual intercourse, including genital-genital, oral-genital, anal-genital, or oral-anal, whether between persons of the same or opposite sex; and
(B) lacks serious literary, artistic, political, or scientific value

CBLDF Executive Director Charles Brownstein notes,”We don’t yet have enough information to determine what factors led to Mr. Bee’s decision to plead guilty to obscenity charges. I would say, however, that the government’s description of the comics on his computer could easily describe a variety of comics that possess artistic and literary merit, including Robert Crumb’s “Joe Blow,” a story I frequently lecture about because it was the subject of a badly reasoned obscenity conviction in the 1970 case People v. Kirkpatrick. I’m not at all persuaded that the comics Mr. Bee had on his computer weren’t legitimate speech.”

Brownstein adds, “The main lesson this sad case should send to the community is that your very first call in any First Amendment emergency should be to the Comic Book Legal Defense Fund (800-99-CBLDF).  We retain an expert legal team who are able to quickly manage cases against comics, and often get them dropped before they go to court. Earlier this year we were successful in ending an investigation involving a comics reader in Idaho who was also turned into police by an intimate partner.  That partner alleged that the comics this reader owned were child pornography and obscene.  They weren’t. Our powerful legal team asserted that truth and made the case go away before it went to court.  The earlier we receive the call for help, the better equipped we are to make a positive difference in the outcome.”

Help prevent cases like this from happening by raising awareness of the CBLDF! Follow us on Twitter and Facebook, and let your community know we are ready to leap to action in a First Amendment Emergency.  You can also help by making a donation or becoming a member of the CBLDF!