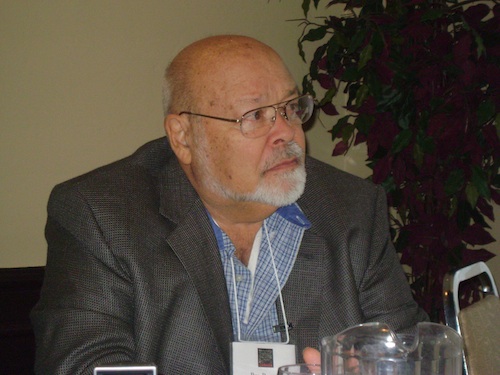 Around the world, particularly in developing countries with low literacy rates, political cartoons serve an important function in public debate. But too often, cartoonists who defy secular or religious authorities face intimidation, arrest, violent attacks, and even death. Cartoonists Rights Network International, a nonprofit organization that aids cartoonists in danger, was co-founded in 1992 by international development consultant Robert Russell. Recently the online magazine Sampsonia Way featured a series of interviews with Russell and several of the cartoonists his organization has helped.

In an interview conducted by Olivia Stransky, Russell says he conceived of CRNI when he met Sri Lankan cartoonist Jiffry Yoonoos, who had been severely beaten in his home after casting an unfavorable light on then-president Ranasinghe Premadasa. Russell asked Yoonoos how he could help, imagining U.S. diplomatic pressure or an international letter-writing campaign, but he received a much more practical and strikingly courageous reply: “If they kill me, please make sure my children have sandals for their feet when they go to school. If I am put in the hospital again, please make sure I have a doctor who will take care of me.”

Instead, Russell and Yoonoos founded CRNI to aid and advocate for cartoonists in similar situations. Although there are other international aid organizations for threatened members of the press, CRNI is the only one that focuses solely on cartoonists, many of whom are particularly vulnerable because they’re freelancers without an employer to provide insurance, support, or physical protection if needed. Despite their lowly position in the media hierarchy, however, Russell says that the influence cartoonists wield in developing countries is enormous:

[T]he editorial cartoonist is the most cost-effective agent of change in society. An American embassy political officer in Uganda told me that during her diplomat training she was taught that the first thing you should do every day is read the daily political cartoons. Then you will know what every bus driver, ditch digger, office worker, and common man, for example, will be talking about that day. That hit me like a two-by-four. Who in society can have more impact on people’s opinions for so little cost?

But this democratic influence also makes cartoonists a prime target for governments looking to flex their muscles and crack down on the press. The number of artists in need of CRNI’s help has increased exponentially in the past few years, says Russell:

Twenty years ago we might have one new client a month. Today we have at least two new clients a week. Because of the rising awareness on the part of both terrorists and tyrants of the power of cartoons, attacks against them are getting more serious. Right now we have to pick and choose the cartoonists we can help based on the amount of imminent life-threatening danger and the very precious available staff time [we] have. We would like to hire another two people to deal directly with cartoonists just in the Middle Eastern countries who are in trouble.

Fortunately, international awareness of political cartoonists’ value has grown in tandem with the threats against them. The 2006 furor over a Dutch series of cartoons depicting Muhammad was a watershed moment, says Russell:

The world exploded in anger because of those cartoons, and suddenly the journalism world sat up and said, ‘Whoa, whoa. What’s going on here?’ Those little images have caused an incredible amount of resentment and strife, but also demonstrated the absolute power and influence of political cartoons.

Some of CRNI’s clients and the cartoons that prompted attacks against them are featured in the online exhibit Art to Die For, and you can read the full interview with Russell here at Sampsonia Way.