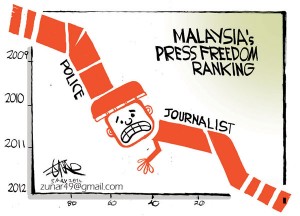 Malaysian cartoonist Zunar — pen name of Zulkiflee Anwar Ulhaque — has elected to appeal a ruling related to his 2010 arrest and detention while under investigation for violation of Malaysia’s Sedition Act.

In September of 2010, Zunar’s office was raided, hours before the release of his aptly named Cartoon-o-phobia, a collection of both previously-published and new political cartoon work. Nearly 70 copies of the book were seized, and Zunar — whose previous three books had all been banned by the Malaysian Home Ministry — was detained.

Ultimately, no material that the court deemed seditious was found, and Zunar was released without charges. The cartoonist eventually filed suit against the government, claiming a bad faith, illegal arrest. Though the court ruled against the seizure of Zunar’s books, requiring that they be returned and damages be paid, they simultaneously declared the initial arrest to be lawful under the sedition act. Zunar describes the decision to Cartoon Movement:

In his ruling [in] July last year, the Kuala Lumpur High Court Judge Justice Vazeer Alam Mydin Meera ruled that the detention was lawful, even though in the other part of the judgment the court had instructed the police to return all my books and drawing and pay the damages.

Now, Zunar and his lawyers are formally appealing this decision, pressing for the courts to recognize the problematic nature of the arrests coming before the presumed seditious materials were even given distribution. Zunar writes:

The Appellate Court has set 18th of June to hear my appeal on the decision of the Kuala Lumpur High Court’s ruling regarding detention of me under the Sedition Act three years ago.

CBLDF has previously reported on Zunar’s ongoing legal challenges. As of this writing, the results of the appeal have not been announced, so we will continue to follow future developments.