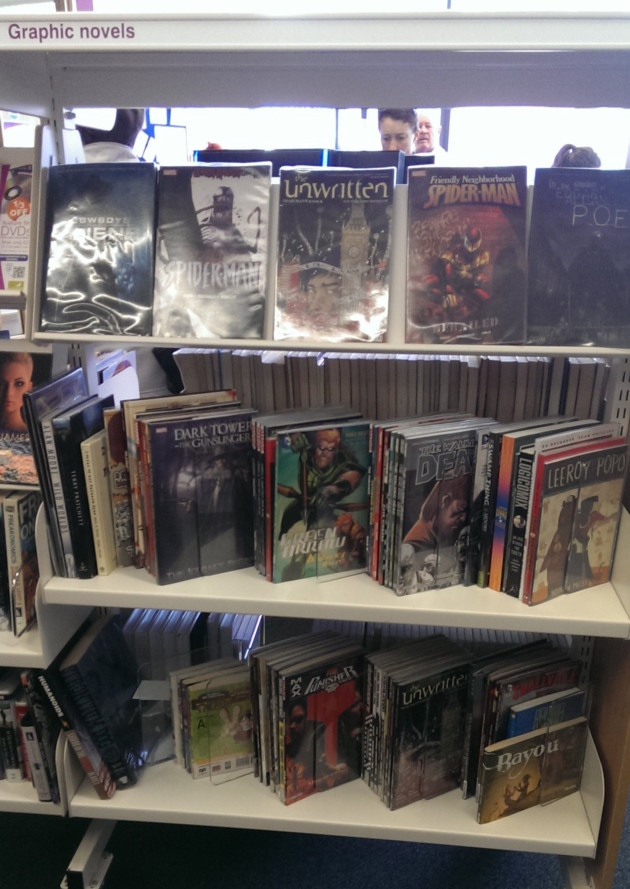 After a parent in the small English town of Harpenden complained that one of her children was able to access adult graphic novels in the local library, new borrowing restrictions for minors have been imposed across the entire Hertfordshire library system. Children and teens under 16 are now barred from checking out any comics or graphic novels shelved in the adult section of the library. According to an article in the Hertfordshire Mercury, this comprises not only the “really disturbing stuff” that prompted the original complaint, but also popular series such as The Avengers, Iron Man and Batman.

While visiting the Harpenden library which recently moved into a relatively small former storefront space, Louisa de Beaufort, a mother of two children under 10, noticed graphic novels “displayed on the other side of shelves holding children’s books.” After successfully checking out 10 books designated “for mature readers” with one of her childrens’ library cards on a self-service checkout machine, she lodged a complaint with the Hertfordshire County Council. “I just felt so incredibly sad I cannot let my children go anywhere without supervision,” she told the Herts Advertiser.

In response to de Beaufort’s complaint, the shelving placement of graphic novels was reviewed in all 46 Hertfordshire library branches and minors were barred from checking out any book with a publisher’s age designation of 18+. But library staff are reportedly unhappy with another rule change which restricts users under 16 from checking out virtually all comics and graphic novels. An anonymous worker told the Mercury:

There have been concerns from staff at all levels of the [library] service. Young people are wanting to read things rather than just doing it for homework and we are not letting them. With young people especially, their love of reading can be turned off. Some do have adult content, but there is a warning by the publisher on them. It used to be down to the parents, they have been taking responsibility for what their child has been reading and we have never had any complaints that I am aware of.

While comics usually have to fight the stereotype that they are only for children, the Hertfordshire Council seems to have taken that logic much too far in the other direction. Obviously there is a huge difference between Friendly Neighborhood Spider-Man and some of the titles that de Beaufort checked out such as Fatale; that’s why, as the anonymous staff member pointed out, parents should be familiar with what their own children are reading. Sadly, the Council seems to have opted for what it undoubtedly saw as the conflict-free option: restricting all children and many teens from reading harmless comics they might enjoy.