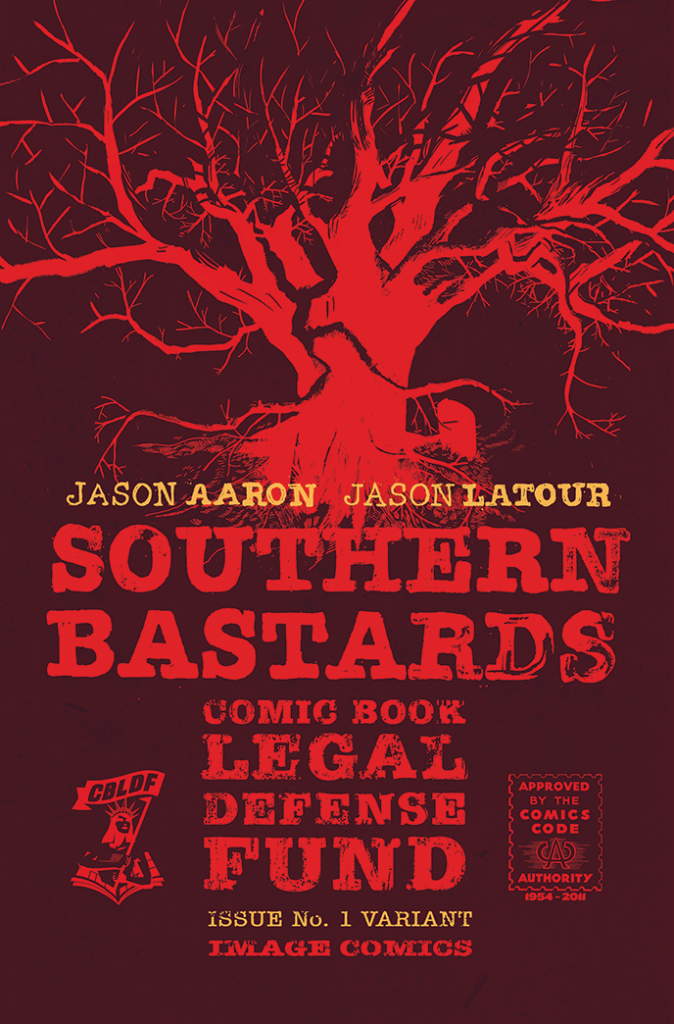 CBLDF is returning to Charlotte, North Carolina, this weekend, where we are excited to be exhibiting at HeroesCon 2014 booth 1222!

Heroes Convention was founded in 1982 by Shelton Drum, the owner of Charlotte’s Heroes Aren’t Hard To Find comics shop. The convention has become famous for its comics-first and family-friendly atmosphere, where fans can mingle directly with professionals and exhibitors. The convention runs June 20 – 22 at the Charlotte Convention Center (501 S. College St., Charlotte, NC 28202).

CBLDF will be in booth 1222 with our usual array of spectacular signed and exclusive premiums. As an exclusive for HeroesCon, the cover for the CBLDF Comics Code Variant of Southern Bastards #1 has been made into a short-run, limited edition 13″ x 20″ full color, numbered print. The prints have already been signed by Southern Bastards writer Jason Aaron, and will be signed on-site at HeroesCon by artist Jason Latour. These prints are VERY limited, and they will be available starting Saturday, June 21 — come by booth 102 for details!

While you’re at HeroesCon, don’t miss a chance to learn more about comics censorship during “Comics Regulation, Comics Censorship: Past and Present,” a panel featuring CBLDF founder and Advisory Board co-chair, Denis Kitchen! The details:

Cartoonist Ben Towle and writer Craig Fischer team up with a cadre of expert commentators to examine those moments when political and public outrage over the content of comic books disrupted the body politic. A discussion of the recent South Carolina Fun Home controversy, where legislators in the House of Representatives tried to reduce state funding to the College of Charleston as a penalty for using Alison Bechdel’s lesbian-themed graphic novel in a campus program. Dr. Consuela Francis, a comics scholar and professor in the English Department at the College of Charleston, and Christopher Brook, the Legal Director of North Carolina’s chapter of the American Civil Liberties Union.

Then we’ll reconsider one of the most controversial figures in comics’ history: Dr. Fredric Wertham, author of 1954’s Seduction of the Innocent (published 60 years ago) and outspoken critic of what he considered the negative effects of comics on children. We’ll be joined via video by Dr. Bart Beaty (the author of Fredric Wertham and the Critique of Mass Culture [2005]) and Dr. Carol Tilley (the author of an article about distortions in Wertham’s research) to chart the latest developments in “Wertham Studies.”

Finally, Craig will conduct a career-spanning interview with legendary industry figure Denis Kitchen. We’ll zero in on the censorship hassles Kitchen tackled as a publisher and distributor of underground comix, on his role in the founding of the Comic Book Legal Defense Fund in 1986, and on his involvement in the CBLDF’s highest profile case, the conviction of artist Mike Diana for obscenity in 1994 (20 years ago). Join us for a thought-provoking exchange of ideas…and for a cake decorated to look like the seal of the Comics Code Authority!

This panel is sponsored by the ACLU of North Carolina.

Come support CBLDF and the right to read this weekend at HeroesCon 2014! We’ll see you at booth 1222!