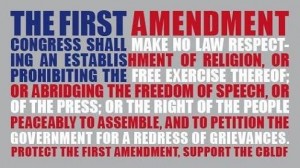 According to a national poll, this year marked an important shift in how our nation’s youth views the freedom of speech. For the first time since the poll’s inception, the results indicate that American high school students value the protections granted by the First Amendment more than adults. It is unclear whether this is a result of the ever-growing world of social media, awareness of questionable NSA activity, or something else. Regardless of the reason, the voice of country’s students is gaining volume.

The poll, funded by the John S. and James L. Knight Foundation, questioned 10,463 high school students and 588 teachers this year. The poll touched on three aspects of the First Amendment: freedom of speech, religion, and press. Questions in the poll included topics ranging from government spying to the school newspaper.

When the poll began ten years ago, 35% of students and 30% of adults indicated that they believed that the protections granted by the First Amendment went too far. This year, 24% of students and 38% of adults believe that the protections go too far. It is certainly interesting that today, not only are more students supportive of the First Amendment, less adults are supportive!

Results tended to be more polarized with regard to issues that affect students on a more personal level. Over 60% of students agreed that they should be able to express their opinions about school officials on their social media accounts without fear of reprisal by school officials. They also agreed that they should be able to touch on controversial issues in student newspapers without threats of censorship from school authorities. Teachers disagreed on both points.

Freedom of speech related to privacy rights was important to students as well. Students were concerned with their online speech being protected from both corporations and the government. According to the poll:

• 72% would disapprove of others using and distributing a picture they had posted online.

• 71% mildly or strongly disagree with the statement: “businesses should be allowed to track your searches online to personalize your search results and sell you products.”

• 80% said it was important that the content they post online is private and available only to those whom they want it to be available.

• 60% disagreed with the statement: “the government should be allowed to spy on anyone’s online messages and phone calls as a way of identifying possible terrorists.”

Another interesting finding in the poll was how much knowledge affected support of the First Amendment: 65% of students exposed to digital news on a daily basis were supportive of the ability to express unpopular opinions. The number was even higher among students who had taken classes that taught the First Amendment. The study also showed that the more awareness that students had regarding the NSA surveillance, the more supportive they were regarding whistleblowing on secret government projects.

The results of the poll show that students are not only becoming more supportive of First Amendment protection in general, it also shows that they are realizing that these issues affect them, even as minors. Students are demonstrating that they realize not only are their thoughts and opinions subject to censorship, but the material that they are being taught in schools is at risk as well.

This attitude is evident in many of the recent book challenges we have fought. Students are taking it upon themselves to protest the banning of books that adults have deemed inappropriate to be taught in schools. Teens stress that there is value behind reading books that deal with risqué  topic such as mental illness, violence, and sexual abuse. They feel that it is important for them to be exposed to these things because they exist in the world around them and to ignore them would be disingenuous. Maybe the adults around them should spend more time listening to teens and less time trying to take away their First Amendment rights.