We’re an inquisitive crew here at CBLDF, so we sent some questions to a few of the creators included in the Dynamite Humble MEGA Holidays Bundle. Gail Simone (Red Sonja), Tim Seeley (Hack / Slash), Matt Wagner (Django / Zorro), and David Walker (Shaft) hit us back with some pretty amazing answers… 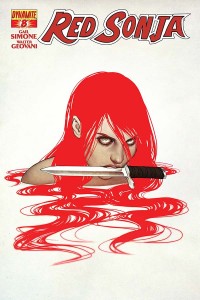 Gail Simone is a force to be reckoned with. An incredibly talented and outspoken writer, she has challenged — and changed — the comics landscape through relentless and frequently humorous commentary on the role women play both in the pages of comics and as creators.

Virtually any character Simone touches is revitalized and transformed, and this is no less true of Red Sonja, the archetypal female barbarian who has enchanted comics readers for decades. Red Sonja is part of the Dynamite Humble MEGA Holidays Bundle, so we asked Simone about our favorite redheaded warrior…

1. The Humble Dynamite Mega Holidays Bundle includes some of your Red Sonja books, and your work with the character has been universally praised. What do you like best about the She-Devil with a Sword?

Gail Simone: Well, she’s a dangerous redhead who takes no crap from anyone, I can’t imagine why that might appeal to me! Seriously, I love that she is so many things that we are all supposed to frown upon. She’s angry, violent, and bawdy. She drinks too much, she likes the company of rowdy bedmates, she swears, and she fights giant snakes on occasion. What’s not to love?

2. Why does the character of Red Sonja appeal to so many people?

Gail Simone: She really was one of the prototypical female ass-kickers. To many, she’s mostly pin-up art, you know, she could be airbrushed on the side of a stoner’s van. But there’s so much more there. She makes her own rules, she grabs life by the throat, she wears what she wants, says what she feels, and does what she shouldn’t, and that’s a great deal of fun. A lot of female characters are sort of ill-mannered heroines these days, but Sonja has been that way for forty years now. We just put some polish on it!

3. The Humble Dynamite Mega Holidays Bundle is intended to raise money for charity, including CBLDF, and you’ve previously been a supporter of CBLDF’s work on behalf of the comics community. Why is protecting free speech important to you?

Gail Simone: I feel like this becomes ever more important as media empires continue to be deregulated and consolidated. It means fewer voices in mainstream media saying increasingly coordinated things. We need art to shock, to uplift, to challenge, and to sometimes just give a big wet raspberry to conventional wisdom and manners. But even beyond that, so many of the cases against comic artists and retailers have been so incredibly false and deliberately dishonest. I am proud to support an organization that stands up and says, “This is not okay.” And I think Nick Barrucci and Dynamite feel the same way. This is a great way to get a ton of amazing books and do something good, for pennies a title. It’s well, well worth it. I HAVE the books and I still bought the bundle! 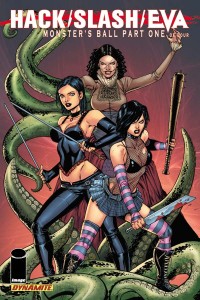 Hack / Slash / Eva is among the titles in the Dynamite Humble MEGA Holidays Bundle, so we asked Seeley to revisit Cassie Hack…

1. Hack / Slash turns horror tropes on their ear, taking the typical horror movie damsel and making her into a ruthless and self-sufficient antihero. Is Cassie Hack inspired by — or a direct response to — any particular horror movie or series?

Tim Seeley: Cassie was always a combination of all the “final girl” type characters, but I suppose, since all slasher movies are pretty much inspired by PSYCHO that she’s an ass-kicking take on Janet Leigh…the girl is the shower fights back!

2. Hack / Slash crossovers, such as the Hack / Slash / Eva: Monster’s Ball collection that can be found in the Humble Dynamite Mega Holidays Bundle, are a lot of fun. If you could work on a crossover with any horror movie character, who would it be and why?

Tim Seeley: Well, I got to do ASH from Army of Darkness, so that’s one dream crossover down But I’d still love to have Cassie meet Michael Myers from Halloween.

3. The Humble Dynamite Mega Holidays Bundle is intended to raise money for charity, including CBLDF, and you’ve supported CBLDF’s work on behalf of the comics community. Why is protecting free speech important to you?

Tim Seeley:  Because free speech is one of the most important rights we have as Americans and one that’s most often under attack. Comics have come a long way over the years, but a lot of creators still face scrutiny and even criminal charges for making their art. We have to stand up for them, always, and the CBLDF does that! 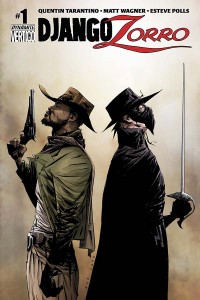 Matt Wagner has worked on books featuring some of comics most venerated characters, whether his own creations Grendel and Kevin Matchstick or licensed characters such as Batman and the Green Hornet.

Wagner took on the dashing vigilante of the people, Zorro, who has recently become a mentor to Quentin Tarantino’s Django in Django / Zorro. The Dynamite Humble MEGA Holidays Bundle, includes Wagner’s Zorro and his team up with Django, so we put Wagner to the three-question screws…

1. The character of Zorro holds a special place in the minds of many people, whether because of the pulps, movies, television series, or comics. Why do you think Zorro has such an enduring legacy?

Matt Wagner: Partially due to the fact that he was basically the very first of what has come to dominate so much of the modern pop cultural landscape — the ideal of the masked crusader for justice. So many characters in comics, pulps, film and early radio take their cues from the motifs found in Zorro’s original adventure, The Curse of Capistrano. But his enduring appeal also comes from the fact that he isn’t an angst-ridden vigilante out for some form of personal vengeance. Zorro fights for the rights of the oppressed, and his rallying cry is, “Justice!  Justice for all!” Especially in these times of moral confusion, I think that sort of true hero really resonates with a lot of readers.

2. Zorro Volume One and Django / Zorro #1 are among the books in the Humble Dynamite Mega Holidays Bundle. What was your favorite part about working with these characters?

Matt Wagner: I loved, loved, loved Django Unchained!  I’m a big fan for all of Quentin’s films but Django struck a particular chord with me; to my mind, it’s his most straight-up heroic movie to date. I’ve had a hand in a variety of crossover events over the course of my career and it’s always fun trying to portray a pair of Type-A personalities in a single narrative. It can be a real balancing act and that makes it exciting. When Quentin and I first met up to discuss this project, I assumed we’d have to incorporate a legacy version of Zorro, considering the close-not-in-sync time periods. But Quentin was insistent that we utilized the original Diego de la Vega; “This has to be your Zorro!” I immediately realized how an older Diego would fill much the same role as the King Schultz character from Unchained, and it all made perfect sense. So, in a sense, I’m getting to redefine Zorro in a whole new light as well as playing with Quentin’s iconic character as well.

3. The Humble Dynamite Mega Holidays Bundle is intended to raise money for charity, including CBLDF, and you’ve been a long-time supporter of CBLDF. Why is protecting free speech important to you?

Matt Wagner: Well, both of these characters battle oppression in all its nasty incarnations. It’s only by supporting and protecting the freedom to express any idea that we can truly follow their narrative example in the real world. 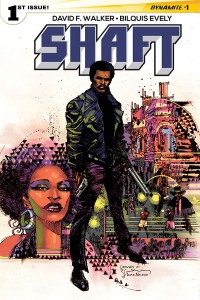 David Walker has worked in film, comics, and Young Adult literature. His work in comics includes the Dark Horse miniseries Number 13 and the Monkeybrain mini series The Army of Dr. Moreau. His debut YA novel is Super Justice Force.

Recently, Walker took the reins of one of the most iconic characters of all time for Dynamite Comics: Shaft. While the mention of Shaft may conjure the dulcet tones of Isaac Hayes, Walker delved into Ernest Tidyman’s original Shaft novels to bring greater depth and impact to the character. Shaft #1 is one of the titles featured in the Dynamite Humble MEGA Holidays Bundle, so we asked Walker some questions about the character, the novels, and free speech…

1. The Humble Dynamite Mega Holidays Bundle includes Shaft #1. What did you like best about working on the book?

David Walker: Shaft is an iconic character that goes back to my childhood. Growing, my heroes were characters like James Bond, Batman, the Six Million Dollar Man, Captain Kirk, and, of course, John Shaft. The key thing with Shaft was he was the only black character in an otherwise all white world of heroes, making him the only one that looked like me and members of my family. I have been very vocal about the lack of quality black characters in the pop culture, and in comics specifically for years. Working on Shaft provided me with an opportunity to do my part to change things a bit. I can’t express the pure joy of writing a character that has meant so much to me. And on top of that, to be the one to bring that character to the world of comics—there’s no way to describe that in words. I feel like the luckiest writer in comics right now.

David Walker: The cinematic version of Shaft is just a watered down version of the literary incarnation. There is more history and greater sense of character depth to be found in the pages of Ernest Tidyman’s books, and frankly it was the books that made me want to do this project. On top of that, I think most people only think they are familiar with Shaft. They know the name, and the theme song, and maybe the iconic imagery, but character isn’t as etched into the pop culture consciousness as some other characters.

3. The Humble Dynamite Mega Holidays Bundle is intended to raise money for charity, including CBLDF. Why is protecting free speech important to you?

David Walker: I could go on and on about the importance of free speech. Those that know me know that I tend to be very vocal in my views on many things, and that right there is me exercising my freedom of speech. I come from a background in journalism, and over the years I have said things in very public places that were both important and incredibly stupid. I admit, I’ve used my freedom of speech—and my freedom of the press—recklessly at times. Such is the hubris of youth. Now I have a better understanding of the responsibilities that come with the freedoms many of us take for granted. I believe it is through the things we do and say that truth of our moral character and the moral character of others is revealed, for better or worse. On a more immediate and level, Shaft contains language that is sure to rub some people the wrong way. As a writer, it was important to use certain words to not only set the tone of the story, but also to develop the characters. I needed to reveal truths. To their credit, Dynamite didn’t shy away from the language I used, which means they didn’t shy away from the language I used to expose the truth I envisioned in the story. To be a writer, and to enjoy that kind of freedom, is an incredible gift.

Support the right to read and name your price for some amazing Dynamite Entertainment comics! Check out the Dynamite Humble MEGA Holidays Bundle!