During a recent visit to France, comics creator Dylan Horrocks visited the site of the Charlie Hebdo attacks. He shared his thoughts on the visit exclusively with CBLDF.

In the English-speaking world, the Charlie Hebdo attack has largely been responded to in very abstract terms; op-eds and online discussion have revolved around questions of free speech and the limits of satire, almost as if this were merely a hypothetical scenario devised for the benefit of would-be political philosophers.

The Charlie Hebdo offices are still closed off behind police barriers. People have left flowers, messages, drawings, pencils outside. 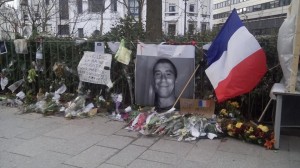 The spot where policeman Ahmed Merabet was killed, a short distance from the Charlie Hebdo offices.

But here in France, the murders have been experienced in much more concrete terms. These were real people, some of them well known and widely respected, and the shock and horror of their deaths has powerfully affected many people. Charlie Hebdo is an institution in France — if you can call an anarchic collection of iconoclastic individualists an institution. “Charlie has always been there,” one friend told me, echoing what others have said. You could love them or hate them, agree with some things, and argue with others, but they have been a familiar presence in French political commentary and cartooning for longer than most can remember. Many cartoonists have worked on Charlie (or its earlier incarnation, Hara Kiri), from Florence Cestac to Moebius. Among the murdered cartoonists, Wolinski and Cabu are especially important figures in French comics; Cabu even appeared for years on children’s television shows, encouraging a generation of kids to draw. 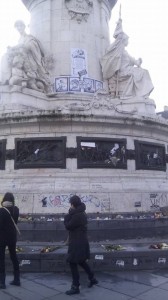 When news of the Charlie Hebdo killings spread, people began gathering in the Place de la République. Even now, the monument in the square is covered with flowers, candles, signs, banners and graffiti.

Everywhere you go, there are Je Suis Charlie signs and badges, Charlie Hebdo cartoons are hung in windows and pasted on walls, and every comic shop and bookstore has a prominent display of books by the slain cartoonists. “The events” are on everyone’s mind — reinforced by the frequent sight of soldiers standing guard outside Jewish schools, synagogues, mosques and newspaper offices. Even my publisher here in France has had soldiers guarding their doors since mid-January, because they share the building with the publisher of Michel Houellebecq’s controversial new novel (which, coincidentally, was the subject of Charlie Hebdo‘s cover on the day of the attack).

It’s all very strange for a visiting cartoonist from the other side of the world. But one thing is very clear: the brutal murder of these cartoonists has shocked the French comics scene to the core. And cartoonists and comics creators everywhere should be paying close attention.

Last night in Brussels, the home of Tintin, a comic shop owner (who once made a pilgrimage to Wally Wood’s studio shortly before his death) solemnly took a badge from her sweater and silently presented it to me. It was a special (and hence collectable) badge from Angoulême, with the festival’s Lewis Trondheim-designed mascot proudly holding a “Je Suis Charlie” sign. It was such a sweet, solemn and very comics collectorish gesture. Needless to say, today I am wearing it with pride.

Dylan Horrocks has written and drawn graphic novels, comic books, comic strips and short stories for publishers around the world. His graphic novel Hicksville has been published in six languages, was a Comics Journal Book of the Year, and is #12 in Rolling Stone’s list of the Fifty Best Non-Superhero Graphic Novels of all time. He has also written comics for Vertigo (Hunter: the Age of Magic) and DC Comics (Batgirl, Batman: Legends of the Dark Knight). His comic strip “Milo’s Week” appeared weekly in the New Zealand Listener between 1995 and 1997, and he has contributed political cartoons to the New Zealand Political Review. Dylan was born in 1966 and lives in Auckland, New Zealand. He is married to youth health researcher Dr. Terry Fleming and they have two sons, Louis and Abe. http://hicksvillecomics.com/