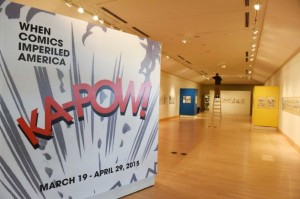 A little over 60 years ago, the comics industry almost met its demise in the form of a misguided psychologist, specious science, Senate hearings, and rampant self-censorship. An exhibit that opens today at the Flinn Gallery in the Greenwich Library explores the “menace” of comics and the birth of the Comics Code.

“KA-POW! When Comics Imperiled America” runs March 19 – April in Greenwich, Connecticut, and features original comics art from the personal collection of Robert Reiner. The collection includes artwork produced for EC Comics in the early 1950s, and the exhibit collects the complete artwork for ten EC stories, a rare treat for comics fans, as Reiner tells Robert Marchant with greenwichtime.com:

“Most people don’t see the entire story — they see individual pages only,” Reiner said. “To actually put complete stories together — it’s so rare, from what’s called the Golden Age of comics. From a historical perspective, here’s a chance to see what happened then, what the artists were doing, how innovative they were at the time, and how much of an influence they had on current artists, writers and filmmakers.”

CBLDF Deputy Director Alex Cox also spoke with Marchant about the importance of the art that will be displayed at the Flinn Gallery:

“These are works by some of the greatest American illustrators working at their peak,” [Cox] said. “From a collector’s standpoint, these pages are about as good as it gets. These are gold standard when it comes to collecting original comic art. Beautiful stuff.”

Cox also spoke about the impact of the Comics Code, which arose in 1954 as a result of attacks on comics featuring the artwork on display at the Flinn Gallery:

“It was devastating. Publishers closed down, entire genres vanished, and hundreds of people lost their jobs. The art form was reduced to juvenile content, and it would be decades before it fully recovered,” Cox said.

The opening reception for the exhibit begins tonight at 6:00 p.m., and the exhibit will run until April 29, 2015. The exhibit description follows, and you can view images from the exhibit at greenwich.com or you can find more information on the Flinn Gallery website.

A grave menace threatened the United States sixty years ago. It wasn’t the danger of nuclear war, the spread of polio or civil unrest. The enemy was a ten-cent corner drugstore comic book.

KA-POW! When Comics Imperiled America looks at a time when a frightened populace was led to believe that colorful stories printed on pulp paper would transform readers into juvenile delinquents.

Prominent psychiatrist Dr. Fredric Wertham claimed that comic books were a damaging influence on America’s youth. He believed that the graphic images and lurid plot lines could stoke violence and antisocial behavior and cited clinical evidence to prove his point.

A U.S. Senate Sub-committee investigation was launched in 1954 led by later vice-presidential candidate Estes Kefauver. While the public proceedings found no evidence that reading comic books led to juvenile delinquency it asked the industry to police itself and for parents and teachers to take a more active role.

But the damage was done and many publishers and popular titles disappeared, ending what had been known as the Golden Age of comic books. The Comics Code Authority was established and stories were accepted or banned based on onerous guidelines.

A big business in the fifties, as many as 100 million comic books were sold monthly. Although the superhero and funny animal titles were popular in the forties the appetite had turned to subjects that reflected current trends and interests.

Perhaps the most prominent comic book publisher at the time was Entertaining Comics (EC), led by William M. Gaines. An aspiring high school teacher, Gaines found himself the 25 year old head of a struggling publishing company when his father died in a boating accident.

The EC team would later be called among the most talented assembly of comic book artists and writers the industry had ever seen.

While quickly copied because of their unprecedented success, EC stories were markedly different from the competition. They were expertly illustrated, written for an intelligent audience and offered an unexpected twist ending.

Critics would point to the violence depicted in the crime and horror titles or the mature nature of the story subjects. Gaines had assumed an intelligent audience comprised of young adults and older readers and not children who would otherwise find little meaning in the work.

When the Comics Code arrived Gaines first balked at censorship, eventually relented and submitted his work lest the comics not be distributed. But by 1955 it was clear that EC’s comic books were doomed and he ceased publishing all but one title – Mad. By turning this comic book into a magazine Gaines was free of the Comics Code and saw its circulation peak at more than 2 million over the next two decades.

For the first time an exhibition of the EC comic book art that struck fear in the hearts of arbiters of good taste will see the light of day. Featured are more than 70 large original comic book art pages, including 10 complete stories, by acknowledged comic art masters.