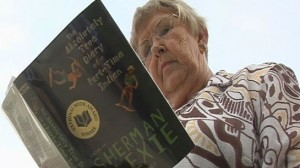 Victory by default in Brunswick County, NC! About a week after local resident Frankie Wood challenged Sherman Alexie’s The Absolutely True Diary of a Part-Time Indian at the second school in as many years, the principal informed her that the challenge would not be considered due to a district policy limiting how often the same book can be targeted.

Wood spent several months last year fighting to have the book removed from the library and curriculum at Cedar Grove Middle School. Her request was staunchly denied by a review committee, then by former superintendent Edward Pruden. When she appealed to the school board, however, they voted to restrict access to the book in the library by requiring students to have parental permission to read it.

Naturally, the aura of the forbidden seems to have made Absolutely True Diary something of a hot commodity among Brunswick County students, as reported by Wood herself:

Make no mistake; with a filthy book like this, those young people share it with their friends. I talked with students that had not been in the classroom with the book or checked it out of the library but they knew all about what was in it. Their friends shared it with them.

After her challenge was denied this time around by West Brunswick High School principal Brock Ahrens, Wood said she was not surprised or even particularly disappointed, admitting she was just trying to communicate with parents via publicity:

This was my way of letting parents know these books are in the school system…. I knew they wouldn’t take it out, but I wanted to let people know they had the choice to not let their children have these filthy books. The only way to get in touch with them is through news media.

Considering that this is Brunswick County’s third book battle in two school years — The Color Purple was also challenged and retained in the AP curriculum in December 2013 — we suspect that most parents in the district have gotten the message that they or their children can always select an alternate reading assignment if they’re uncomfortable with a book for any reason. Wood can rest easy with the knowledge that her point has been made!