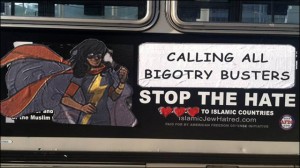 In the days since two gunmen targeted a conference and Muhammad cartoon contest organized by anti-Muslim activist Pamela Geller in Garland, Texas, many Americans have been forced to grapple with what it means to support free speech for all — even those with whom one strongly disagrees. But the debate has also highlighted one of the true beauties of the First Amendment: the right to answer offensive speech with more speech.

As the National Coalition Against Censorship’s Peter Hart noted yesterday, Geller herself often takes a hypocritical position on First Amendment issues; for instance, in 2010 she led the charge against a planned Muslim community center in Manhattan that came to be known on certain cable networks as the “Ground Zero Mosque.” But while the viewpoints of Geller and her followers may be unpopular — and indeed, many of us are glad to see that’s the case — that does not change the fact that they have a constitutional right to voice them.

Below, check out some of the articles we’ve been reading this week to provide a nuanced and principled view of this debate.

Well before Geller organized the Garland contest through her American Freedom Defense Initiative, she was well-known in several major cities for financing ads on public transport that vilified Muslims. Before and after the cartoon event, most American Muslims correctly perceived that she only intended to provoke and that the best response was to ignore her — or find creatively disarming ways to respond.

Linda Sarsour, a New York City Muslim community leader, explained to me that Geller can ‘draw any damn cartoon she wants and I defend her right to do so. I have always fought for her right to be a bigot and I have the right to counter her bigotry with my own speech.’

In response to [Geller’s] hateful ads, here’s what we decided to do. Instead of (in the great tradition of poster defacement) drawing mustaches and/or penises on them, we reached out to the Internet to help raise $15,000 — the minimum ad buy for New York City subways. We decided our ads would be ridiculous, totally loving, and/or (hopefully) hilarious. We raised money from Muslims, Jews, Christians, atheists, Buddhists — we suspect a Wiccan even donated money. We learned that beyond all the hate-tweeting and digital-shaming, in a quiet corner of the Internet there are big-hearted people who put money where their love is.

Muhammad is the most common name in the world. Chances are that all know a Muhammad. So, let’s draw Muhammad. Let’s honor his diversity. Let’s celebrate his many different faces. Let’s elevate his humanity. In a bleak world where the Pamela Gellers are the ones with the mic, let’s shine some light on the good.

‘What we’re doing now is what we’ve been doing for the past decade,’ [Muslimgirl.net editor Amani Al-Khatahtbeh] said, arguing Muslim American activists need to continue envisioning new ways to combat pervasive Islamophobia. ‘We should be seen as allies … getting our voices out there, giving access to our perspective, hopefully will give us a better ability to address these issues in the long run.’

We reiterate the American Muslim community’s support for freedom of speech — even bigoted speech — and its repudiation of terrorism in any form.

Response from Charlie Hebdo and its supporters

By coincidence, this debate arose during the same week that the victims of the Charlie Hebdo attack and their surviving colleagues received PEN American Center’s Freedom of Expression Courage Award, which also sparked controversy in literary circles. Without question, Geller and her ilk have eagerly co-opted the Paris attack as fuel for their narrative of a “clash of civilizations.” This week, the magazine’s staff made clear that they also find Geller distasteful, but she and her followers nevertheless have a right to express themselves.

‘For me, it’s good to debate, [editor-in-chief] Biard added, ‘It’s not good to kill people, even in Texas.’

Je suis Charlie, mais je ne suis pas Pam Geller. She and her dim-witted, ugly organization deserve the protection of the free speech mantle that they wrap themselves in. But would I ever give them a courage award? Hardly. Would I ever want to be in the same room with them? No. Do I wish they would stop? Yes.

The Dallas-based freelance reporter, who has been documenting the back-and-forth between the local Muslim community and anti-Muslim protesters for months, was inside the AFDI event when the shooting happened.

The First Amendment guarantees the right to free speech, even offensive speech. Most people don’t agree with Geller or the spirit of her event, but like the staff of Charlie Hebdo and all cartoonists, she has a right to say her piece without fear of being violently attacked. If we limit the protection of the First Amendment to only the speech with which we agree, then we threaten all free expression. As CBLDF Advisory Board Member (and recent table host at the controversial PEN America awards gala that presented Charlie Hebdo with their honor) Neil Gaiman so eloquently put it: “Because if you don’t stand up for the stuff you don’t like, when they come for the stuff you do like, you’ve already lost.”