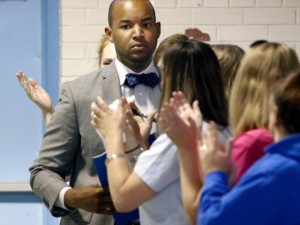 King & King, a frequently-challenged picture book by Linda De Haan and Stern Nijland about two princes who fall in love, is at the center of a controversy in rural Orange County, North Carolina. Third-grade teacher Omar Currie read the book to his class in order to put a stop to bullying against one particular student, but some parents say they should have been notified ahead of time about the same-sex fairy tale.

Currie, who is gay himself, borrowed the book from the assistant principal at Efland-Cheeks Elementary School where he is in his second year of teaching. His goal was to quash other students’ bullying of a boy in his class who acts “a little feminine” — and it worked, Currie told the Raleigh News & Observer. Moreover, the school’s literacy specialist said that the boy who had been bullied seemed reassured “for the first time that he was okay just the way he was.”

Despite the obvious relevance and effectiveness of King & King in Currie’s classroom, some parents and community members maintain that the book is inappropriate for third-graders. One parent who does not have children in Currie’s class has picketed the school and was asked to leave a public meeting on Friday after he repeatedly interrupted the school district’s spokesman. Lisa Baptist, a grandmother who also attended the meeting, said she worried children might act out scenes from the book and that “this is nothing more than bringing homosexuality into a school where it does not belong.”

The school has fielded three formal challenges to King & King. The first was addressed in a meeting last Wednesday, when a review committee decided the book was appropriate but also added the requirement that teachers must notify parents of every book that will be read in the classroom. Currie says that requirement is burdensome, since he reads his students around 500 books in a 180-day school year.

The Wednesday meeting was followed by another on Friday to deal with two more challenges to the book. About 200 people attended the second meeting, and the News & Observer estimated that about 75% of them were supportive of Currie. Addressing the crowd, the teacher gave an impassioned defense of the book and of equal treatment for all of his students:

I repeatedly heard from school officials that the book might have been appropriate to read in a more progressive area without parental consent, but in Efland we need time.

These comments were made as if to persuade me that today is not the time to stand up and protect students… but that change on all issues must come about slowly, even if the safety of my students is compromised.

Currie flatly refuses to accept that notion, and had previously said that he may resign from his job at the end of the school year because he feels unsupported by his principal and the district. The show of support from parents and Currie’s colleagues at the Friday meeting is certainly encouraging; now hopefully administrators will realize before it’s too late that they are on the verge of losing a valuable, caring, and supremely dedicated young educator.