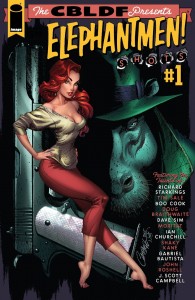 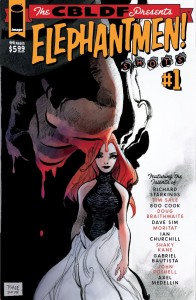 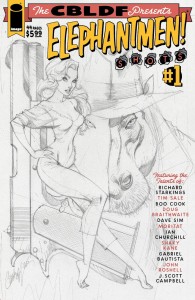 Led by Tim Sale’s nine-page “When the Night Comes,” this special Elephantmen: Shots #1 collects all the Elephantmen strips from Hero Comics, Liberty, and The Thought Bubble Anthology. The collection also features the hard-to-find Judge Dredd, Strontium Dog, and Marineman crossovers and beautiful covers by J. Scott Campbell and Tim Sale!

“I’m sure I wasn’t the only comic book creator affected by the Charlie Hebdo massacre earlier this year. It was a deeply shocking and terrifying event that sent ripples throughout the cartooning world. It really made me realize the importance of supporting organizations like the CBLDF, who stand vigilant for cartoonists whether there’s a traumatic event capturing our attention or not,” said Starkings. “I counted up the strips that we’d produced for The Hero Initiative, Thought Bubble and, of course CBLDF’s own Liberty Annual and decided that, rather than do nothing but worry, I could put out a special issue of Elephantmen to benefit the CBLDF. Eric Stephenson at Image Comics agreed and… voila!”