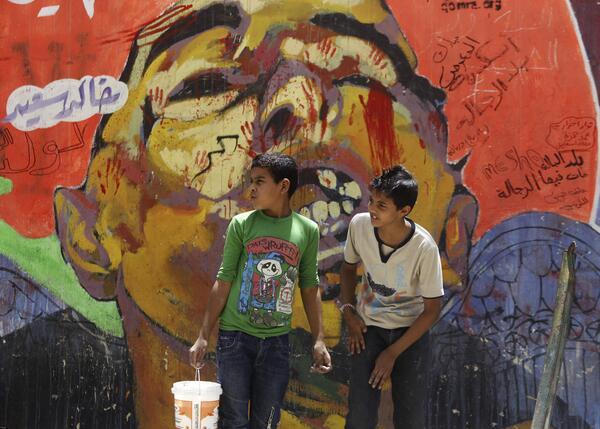 In June 2010, about eight months before the Tahrir Square uprising, a 28-year-old Egyptian blogger named Khaled Said was arrested and beaten to death after he posted a damning video that allegedly showed police helping themselves to the spoils of a drug bust. In the tumultuous months that followed, Said’s face became a potent symbol of revolution as street artists stenciled it on walls throughout Cairo and other cities. But five years later, an article at Middle East Eye shows that this brand of art with a message has virtually disappeared from Egypt under a government crackdown.

Said was a unifying force because he was an Egyptian everyman: middle-class and unconnected to any particular political movement. A leaked photo of his brutalized body in the morgue stoked outrage throughout the country, but it was his fresh-faced passport photo that street artists more commonly adapted for stenciling. According to illustrator and graphic artist Ahmed Nady, Said’s image proliferated just before the January 2011 uprising and for about a year afterwards. Since then, however, nearly all of them have been painted over and socially conscious street artists have mostly been cowed into submission. One such artist, Sifa Abu al-Abbas, told the Egyptian site Tahrir News this past January:

The police are now cracking down on street artists, especially when there are few of them. The truth is that everyone is in low spirits at the moment, and while people are being arrested at random under the protest law, it’s not the right time for any steps that might escalate things.

So for instance, when the socialist activist Shaimaa Sabbagh was shot and killed by police at a January protest and the photo of a fellow activist desperately grasping her around the waist went viral worldwide, the image did not make the leap to the streets of Egypt. As Middle East Eye’s Mary Atkinson points out, the most prominent street art of both Sabbagh and Said is actually in Berlin.

Street art of a kind does still exist in Egypt, to be sure, but it is generally sanctioned by the Sisi government and gives a wide berth to any hint of resistance. According to Nady, “the current regime does not allow for freedom of expression on the streets of Egypt. Doing graffiti has become an adventure so risky that it could lead the artist to lose their life.” Check out Atkinson’s article for Middle East Eye here, and don’t miss the photo gallery of more street art at the end.

← School Decision Does Not Make for a Fairytale Ending for Teacher
CBLDF Heads to San Francisco for ALA Annual, June 26 – 29! →