When former librarian Kelly Jensen heard about the removal of Some Girls Are from an optional high school summer reading list in Charleston, South Carolina, she took the knee-jerk reaction to appease an upset parent as a call to action.

Working closely with her community and even the author of the novel herself, Jensen collected over 830 donated copies of the book and set into motion a city-wide program in Charleston to get those books into as many hands of the unjustly robbed teens as she could.

“Some Girls Are by Courtney Summers is a book about bullying, about girl-on-girl violence, and about sexual violence,” writes Jensen on Book Riot. “It’s the kind of book that teens — especially teen girls — would benefit from picking up, reading, and more, talking about during their first classes in their first year in high school.”

This was the intent behind West Ashley High School’s decision to include the book as optional reading on the summer book list, but these good intentions were overlooked when a parent complained that the book’s depictions of topics such as underage alcohol and drug use, sexual assault, and body image were age inappropriate, leading WAHS Principal Lee Runyon to make a nonsense “common-sense decision” to remove the book from the district’s summer reading list.

“The book was not an assigned title, but rather, it was one of the choices the teens could pick to read. No one forced them to read it,” notes Jensen. And yet, it was one parent’s protest that led to its outright removal from the summer reading list. “It is not, nor will it ever be, one parent’s duty to parent for the entirety of a group of children. Their job is to watch their child and their child alone.”

In response to the ban, Jensen wanted to set a program up that would put copies back into those students’ hands. What started with a couple calls and an idea to send maybe 15 to 20 books to a local Charleston library quickly escalated into 830+ donated books, over $600 in donated funds for shipping costs, a letter from author Courtney Summers, and a city-wide right to read event that challenged the school’s decision and got teens reading. 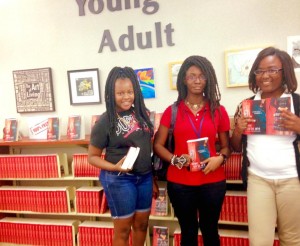 The books were available to teens for free in several local libraries, including two in direct proximity to West Ashley High School, and sent a powerful message that not only do young adults have the right to decide what they want to read, but also demonstrated through the drive’s success the detrimental impact that pulling the book had in the first place on the young students:

This donation drive had an incredible, generous response. But the thing that hits my heart the hardest, and the reason it was totally worthwhile, is that it shows teenagers that there are people out there, in their very own community, who care about them, who care about their voices, and who want to make sure they acquire the skills and tools to think and make choices for themselves.

As the author wrote in a letter that included with every donated book:

One of the reasons I write my novels is so that teenagers living the harsh realities depicted in them will read them and feel less alone. We don’t protect teens by censoring their reality and in doing so, we often deny them a lifeline. Books provide us with the opportunity to empower teens by letting them have a say and a choice in what is relevant to their lives.

The actions of Kelly Jensen and librarian Andria Amaral not only demonstrate immense courage to stand up and protect their community, but also represent a step in the right direction towards protecting the integrity of the education of their children:

The image of teenagers being able to pick up this book, read it, and decide for themselves how they think — it’s powerful. And I can only imagine how excited they are when they learn that they not only get to read the book, but they get to keep it.

CBLDF joined Kids’ Right to Read Project to protest the removal of Some Girls Are — you can read the letter we signed here. Read more about Jensen’s amazing drive in her article for Book Riot.