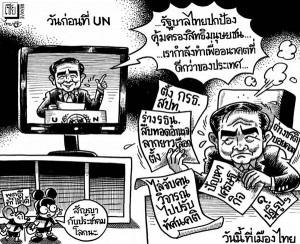 Published on October 3rd, this cartoon by Sia juxtaposes the support Prime Minister Prayuth Chan-ocha claimed for free speech and civil liberties during a recent UN speech with a long list of civil rights violations in Thailand.

Earlier this week, Thai cartoonist Sakda Sae Iew (also known as Sia) and other journalists were taken into military custody by the Royal Thai Army to discuss problems with their subversive works and “adjust their political attitudes” — discussions that have led Sia to limit voluntarily the work that he publishes.

Citing “factual” concerns with Sia’s cartoons, the National Council for Peace and Order brought the cartoonist in to intimidate and discourage him from producing cartoons that have overtly negative political tones towards the current government. In an interview with reporters, Sia noted that the NCPO criticized him for “content in some of the cartoons that do not represent the facts.”

Sia, whose work has increased since the regime change and military coup that overthrew Prime Minister Thaksin Shinawatra in 2006, has used his cartoons — many published in the newspaper Thai Rath — to voice his opinion about the increased attempt to silence Thai citizens. From banning public political activity and protests in opposition to the current regime to a general attempt to suppress free speech, Sia’s cartoons depict a politically turbulent Thailand led by a secretive government that violates basic human rights in ways that much of the world doesn’t see. In response to the claim that his cartoons don’t represent fact, Sia commented “I represent things in accordance with the facts. The issues that I put in the cartoons are from daily news. I didn’t just imagine them.”

In light of the pressure exerted by the military, Sia has voluntarily decided to “decrease” the work that he does for Thai Rath in the hopes that such an action will prevent the newspaper from being targeted any further by the government. “The NCPO did not prohibit me from expressing my opinion,” Sia said. “But they said that from now on, if they see that my drawings and cartoons do not represent facts, they will take legal action against me, and I will be held responsible.”

Sia is confident in his work, though. In speaking with reporters after his release, he noted why the work that he does is important: “I did put in some of my opinions, because writing cartoons is similar to being a columnist. It’s about provoking thought with your writing.”