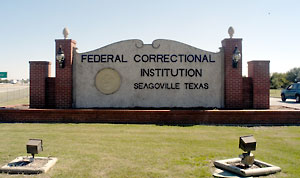 Two men serving time for child pornography charges in a federal prison in Seagoville, Texas, are now facing additional obscenity charges over the possession of drawings depicting the sexual abuse of minors.

Kevin Krause with The Dallas Morning News reports that Danny Borgos and John R. Farrar are being prosecuted for the possession of obscene material under the PROTECT Act, a 2003 law that is intended to prevent child abuse but also prohibits drawings of minors that are deemed obscene under the Miller test standard.

Borgos was found in possession of a 37-page comic book depicting minors engaged in sexual acts. Another inmate in the prison drew the book for Borgos. Under the PROTECT Act, Borgos has been sentenced to an additional 10 years in prison for possession of the drawings, twice as much time as the 5-year sentence he was already serving for a New York conviction for the possession and distribution of child pornography. Farrar, who is serving a 10-year sentence for the possession and transportation of child pornography, was found with at least six drawings depicting minors engaged in sex acts.

CBLDF maintains that drawings do not constitute a crime and that the PROTECT Act overreaches in criminalizing drawings. The content is certainly reprehensible, but no actual children are harmed in the making of a drawing. When individuals are arrested and prosecuted for the possession of drawings, authorities use resources that should otherwise be engaged in catching and imprisoning individuals who actually harm or possess evidence of harm to children. We’re not alone in that assessment, as Krause reports:

James Cantor, Ph.D, an associate professor of psychiatry at the University of Toronto and an international expert on pedophilia, said child pornography laws are intended to protect actual people.

“When talking about a drawing, who’s the victim?” he asked. “We feel these are icky. But icky is not a real reason to pass a law.”

Unfortunately, legal precedent under the PROTECT Act is often on the side of prosecutors. In 2010, Christopher Handley, an ardent manga collector, was prosecuted under the PROTECT Act for a handful of items in a comprehensive collection of manga and anime. In Handley’s case, CBLDF offered to provide expert witnesses, but the Fund never had the chance to do so. Fearing trial, Handley took a plea agreement, serving six months in prison followed by three years of supervised release running concurrent with five years of probation. He also forfeited his entire collection, which was seized by police in May 2009. The sentence marks the first time a comic book reader had been sentenced to jail for owning comic books.

In 2013, Christjian Bee of Monett, Missouri, was sentenced to three years in federal prison without parole, followed by five years of supervised release because of comics he possessed on his computer. Prosecutors asserted that the material “is categorized as obscene and therefore illegal,” despite the fact that the material was not tried in court under the Miller obscenity test.

Authorities are still investigating whether the exchange of the drawings is endemic in the Seagoville federal prison. Krause spoke with Lyn Williams, the training director for the Austin-based Texas Association Against Sexual Assault, who indicated that the such comics and drawings would be a “valuable commodity in prison.” Cantor believes the comics are bad for prisoners, but even he is unwilling to support the prohibition on drawings under the PROTECT Act. He tells Krause, “Good public policy comes from minimizing and eliminating harm.” We would argue that such policies should be focused firmly on protecting actual children rather than diverting resources to prosecute thought crimes.