Although comics have never been a bigger part of mainstream pop culture, they sustained more censorship attacks in 2015 than at any other time this century. CBLDF was on the case, fighting back by providing expert support to keep comics available for everyone.

Crafton Hills declined to modify its curriculum based on the family’s complaint, but hinted at requiring a disclaimer on the syllabus in the future “so students have a better understanding of the course content.” After CBLDF and members of the National Coalition Against Censorship sent a letter urging against that action, the San Bernardino Community College District ultimately decided not to implement such a requirement for Crafton Hills and its other campus, San Bernardino Valley College.

Shultz’s challenge is rare, although similar protests against comics are increasing on college campuses. CBLDF is preparing resources to continue fighting this troubling trend in the new year.

Taking on a Media Attack

Although Palomar is technically back in the RRHS library, the victory is qualified: A parental signature is now required for anyone under 18 who would like to check out the book. The requirement sets up an access barrier for the vast majority of students based on one parent’s complaint. The special treatment for one book— apparently an administrative decision rather than a recommendation of the review committee—also violates the spirit of Rio Rancho Public Schools’ Library Bill of Rights and its challenge policy, which say book challenges are to be treated “objectively, unemotionally, and as a routine matter.” Further, a FOIA request revealed that the district initially ignored its challenge policy. Regardless, many free speech advocates treat the decision as a victory because the book was not removed from the library. 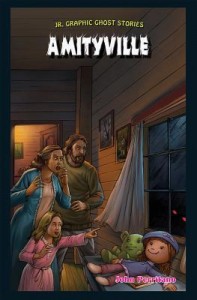 In November, a mother in Knightdale, North Carolina called for the removal of Amityville: Jr. Graphic Ghost Stories from all Wake County schools after her first grade son checked the book out of the Lake Myra Elementary School library. She felt that the graphic novel, which retells the infamous story of the Amityville horror house in Long Island, New York, and the paranormal events that occurred there in the early 1970s, is inappropriate and should not be accessible to students of any age.

Although school district officials did form a review committee to consider Amityville’s fate, they also apparently violated their own policy by pulling the book from library shelves before a decision had been made. Earlier this month CBLDF joined with other organizational members of the Kids’ Right to Read Project to send a letter urging Wake County school administrators to observe the challenge policy and consider the rights of all students when making a decision. The challenge is still pending at this time.

Throughout 2015, CBLDF was confidentially involved in protecting several graphic novels for younger readers from attempted bans. In many cases, we were able to keep the challenges from happening—the best sort of victory!

CBLDF provided tools and resources to librarians who needed assistance defending Neil Gaiman and P. Craig Russell’s graphic novel edition of The Graveyard Book, which was challenged for violent imagery. Surprisingly, we also had to protect Raina Telgemeier’s kid-friendly bestseller Drama from a sexual content challenge that most likely arose because it features gay characters.

After becoming the first graphic novel to earn the Caldecott Honor, Jillian Tamaki and Mariko Tamaki’s This One Summer also became the book that CBLDF had to defend most frequently in 2015. The Caldecott Medal and Honor are given to illustrators whose work is suitable for children up to 14 years of age. An examination of past Caldecott winners and honorees reveals that most of the audience for these books is younger. In the last ten years alone, about 82% of Caldecott winners have been aimed at audiences age 8 and under. As a result, many people have the expectation that Caldecott honorees are meant for the youngest readers.

This One Summer is absolutely eligible and deserving of the Caldecott honor, but problems arose when people ordered the book based on its awards pedigree rather than familiarity with the subject matter and the intended audience. A few people, believing the book is aimed at younger readers, have been shocked to find that the award-winning graphic novel is intended for audiences age 12 and up. Instead of taking responsibility for their lack of familiarity, some of these individuals attacked the book.

More troubling are the challenges that sought to ban This One Summer for its intended audience because of its handling of mature themes of coming of age, teen pregnancy, a failed pregnancy, and mature language. Phoebe Gloeckner’s The Diary of a Teenage Girl also faced a confidential challenge for its mature themes, but our defense of the book helped to ensure that it remained on the shelves.

CBLDF fought these challenges and many more this year, fulfilling our mission to protect the freedom to read comics!