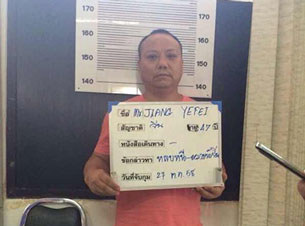 Two Chinese dissidents, including political cartoonist Jiang Yefei, were deported from Thailand back to China last month despite having been granted refugee status by the United Nations. Jiang and fellow pro-democracy activist Dong Guangping were imprisoned upon their return to China and have not been heard from since.

Jiang originally fled to Thailand in 2008 after he was briefly imprisoned and tortured in China for criticizing the government’s response to the Sichuan earthquake. His wife Chu Ling said that he also had attempted to bring an “alternative torch relay” highlighting human rights abuses to China ahead of the Beijing Olympics the same year, but the package containing the torch was intercepted by authorities. Dong arrived in Thailand this year after spending several months in Chinese prison for participating in a commemoration of the Tiananmen Square Massacre.

Both men had become heavily involved in the pro-democracy movement among Chinese expatriates in Thailand, thinking they would be safe there, particularly after both were granted protection letters from the UN High Commissioner for Refugees. Thailand never signed the 1951 Refugee Convention, but until recently had observed it in practice. Since the country fell under military rule last year, however, the government sought to curry favor with China — most notably through a mass deportation of 100 Uighur Muslims who had fled persecution and civil unrest in their home country. Nevertheless Sheng Xue, another Chinese activist living in Thailand, said that the arrest and deportation of Jiang and Dong came as a shock, especially since they were about to be resettled in Canada with their families.

Chu Ling told Al Jazeera that while her husband’s original 2008 arrest was for general acts of protest, it was a recent series of cartoons he created mocking President Xi Jinping that prompted authorities to pursue him across international borders. She alleged that two Chinese officials posing as UN representatives came to the immigration detention center where Jiang and Dong were held and had them sign some documents in Thai, which they couldn’t read. They were told that this was part of the process for their resettlement to Canada, but instead it turned out they had given consent to be deported back to China. (Chu also said she discussed this subterfuge with genuine representatives of the UNHCR, but that office said in a statement that it was “not aware of any such impersonation.”)

Chu was not present when Jiang was removed from the Thai detention center, but has spoken to someone who was. By that point he was well aware of where he was headed, she said:

I heard from a contact person who was in the prison, my husband was shaking. He was very, very scared. He was screaming, ‘Please call everyone and tell them I am being taken away and please ask them to stop me at the airport.’

Apart from the devastating and immediate effect on Jiang, Dong, and their families, this new chapter in international relations has terrifying implications for the thousands of Chinese dissidents who have long thought themselves safe in Thailand. Moreover, it may also be a bad sign of things to come for Wang Liming, AKA Rebel Pepper, China’s best-known political cartoonist, who is currently living in Japan on a temporary visa but failed to gain asylum there. It’s unlikely that Japan will offer the same level of cooperation as Thailand, since the governments of Japan and China are not particularly friendly, but unless Wang finds another solution before his visa expires very soon he will likely be at equal risk of imprisonment and torture back in China.