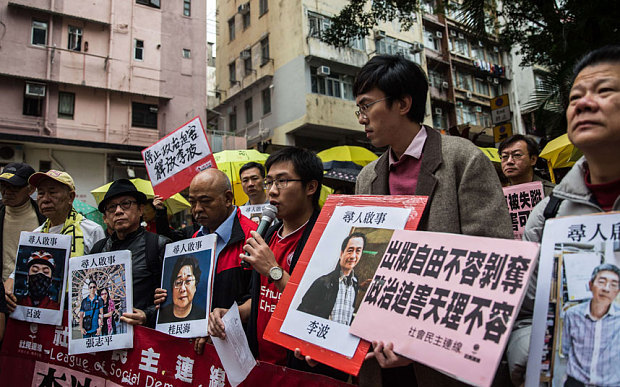 Five employees of Hong Kong publisher and bookseller Mighty Current have gone missing in the past few months, and international publishing and free speech organizations are now demanding answers as to their whereabouts. Editor Lee Bo disappeared last Wednesday, approximately two months after Mighty Current co-owners Gui Minhai and Lu Bo and employees Zhang Zhiping and Lin Rongji also vanished. Many in Hong Kong suspect that the men are in government custody on the Chinese mainland.

In 1997 when Hong Kong reverted to Chinese control after more than 150 years as a British colony, the Chinese government promised to maintain the semi-autonomous region’s civil liberties including freedom of speech and freedom of the press for the next 50 years. They have largely stuck to that promise, allowing demonstrations that would be unimaginable on the mainland such as annual public commemorations of the Tiananmen Square Massacre. Hong Kong is also home to a booming publishing industry which largely serves tourists from the mainland in search of books banned at home.

In fact, that is exactly what Mighty Current publishes and then sells through its own Causeway Bay Bookstore. Its backlist includes titles such as Overseas Mistresses of the Chinese Communist Party and Secrets of Wives of Chinese Communist Party Officials. Others in the Hong Kong publishing world suspect that the government is holding the five men in an attempt to extract information about their sources. The mystery deepened when, shortly after his disappearance, Lee Bo called his wife Choi Ka Ping (the third Mighty Current co-owner) to say that he was “assisting in an investigation” but provided no further details. Gui Minhai has also contacted his wife, who lives in Germany.

In a statement released yesterday, five trade and advocacy groups including the American Booksellers Association, the Association of American Publishers, the Authors Guild, the European and International Booksellers Federation, and PEN American Center demanded answers:

[We] urge the Chinese government to explain the disappearance of the Hong Kong booksellers.  If they are in custody, we call for their immediate release.  When Great Britain relinquished control of Hong Kong in 1997, China promised to protect freedom of press there for 50 years.  The summary abduction of men who are engaged in the publication and sale of books would be a very serious violation of press freedom and would have a profoundly chilling effect on free speech in Hong Kong.

The groups also asked the U.S. government “to investigate the circumstances of these disappearances and to assist in the release of the men.” In a separate statement yesterday, the European Union also expressed its concern, noting that “respect for freedom of expression underpins all free societies.” CBLDF shares these concerns and hopes to see the five men released unharmed in short order.