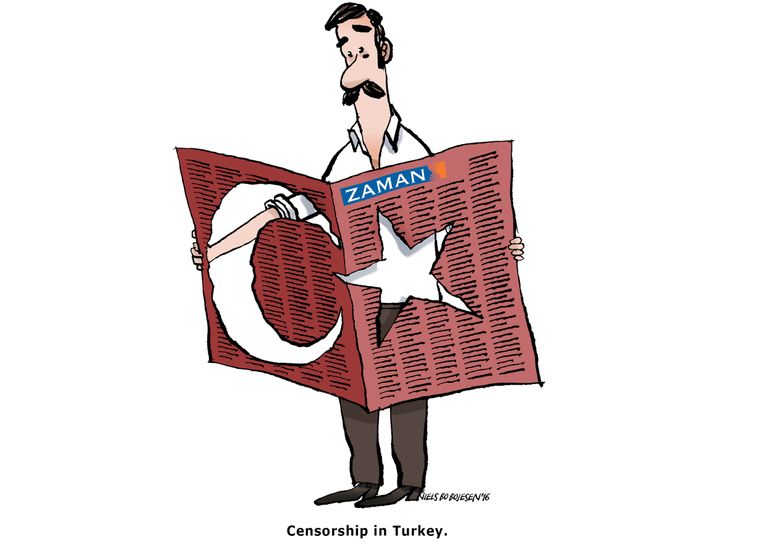 The Turkish government on Friday seized control of the opposition-aligned Feza Media Group, which includes the newspaper Zaman, its English-language sister publication Today’s Zaman, and the Cihan news agency. Employees locked themselves inside the Feza building on Friday as supporters gathered in protest outside, but police dispersed the crowds with tear gas and stormed the building, forcing the staff out around midnight.

The takeover is just the latest dark spot in President Recep Tayyip Erdoğan’s crackdown on both professional journalists (including political cartoonists) and regular citizens, such as the public health worker who was prosecuted and fired for comparing Erdoğan to Lord of the Rings character Gollum on social media. Feza Media Group is aligned with the Gülen movement, named for exiled Turkish Muslim preacher Fethullah Gülen, a former Erdoğan ally who has since turned against him.

Although the Today’s Zaman website is still carrying coverage of the major events of the weekend, as well as a forceful editorial posted in the hours before the raid, some older content has quietly disappeared. That includes the Gollum story above, linked here via Google cache, the daily cartoon Mr. Diplomat [cached], and a recent interview with Brazilian cartoonist Carlos Latuff [cached], which CBLDF covered here. Latuff’s own website was recently blocked in Turkey due to his frequent cartoons criticizing Erdoğan.

Zaman staff managed to issue a regular print edition on Saturday, but by yesterday the paper’s tone took a sharp pro-government turn with the banner headline “Historic Excitement About the Bridge”–referring to a pet project of Erdoğan’s that may bear his name upon completion. Today’s Zaman Editor-in-Chief Sevgi Akarcesme observed on Twitter that “in less than 48 hours, the new admin turned seized Zaman into a propaganda piece of the regime in Turkey.”

Shortly before the seizure on Friday, Today’s Zaman staff sounded the alarm with an editorial that read in part:

Turkey’s highest circulating newspaper, Zaman, and its sister publication Today’s Zaman have come under serious pressure for more than two years, which has taken the form of accreditation bans, tax inspections, meddling with its advertisers and threats to its readers. We have now been threatened with confiscation through the appointment of trustees. We are deeply concerned about all these developments that undermine Turkey’s democratic performance. We believe the only way out of this nightmarish atmosphere is to return to democracy and the rule of law. We are publishing our concerns to inform the Turkish nation, intellectuals who believe in democracy and the wider world.